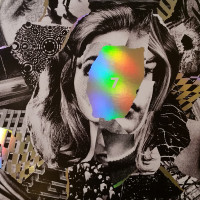 It's safe to say in the realm of dream/psych pop, there's no bigger institution than Beach House. They're a band I can take only in doses though -- because it's such an emotionally heavy listen; very much countering the lush, dreamy landscapes they produce. Bands like Mogwai, Slowdive and Cherry Glazerr really put out great music in this genre last year though, so I was very much looking forward to the champ coming back for another round via 7. And rest assured, there's a lot of good material on hand. However, as I've often find myself thinking with Beach House, it's unbalanced and in this case, the record's too front-loaded.

The songs that wow are pretty much in line with their older records -- hypnotic and ethereal -- but on 7, there's something darker to the melodies at hand. Most rhythms softly grate away at you, searing deep into your skin a la "Dark Spring" and "Pay No Mind." These are the songs that are undoubtedly influencing bands like Cigarettes After Sex, but what I love most is that Beach House try to rough it and dirty things up too by bringing a lot of guitars to the mix. This adds in a rock and roll edge; at least for the first half of the record. And with this approach, I personally find the hooks to be bigger and sink in more. Even on tracks that need adjusting to because they're so unconventionally synth-driven ("Lemon Glow"), Beach House make it work well.

The standout track is an isolated and fragile slow burner called "Drunk in LA" -- one of their best since "Myth". It takes its time and paints a vivid picture of a world crumbling to pieces, with a shimmery backdrop that feels made for Netflix indie movies. But later on, things get so repetitive and boring, it's hard to pick something memorable. It's just bland synth pop e.g. "Black Car" sprawled over the back-end of the album, and yeah, they don't wind the record down well... at all. But thankfully, these jams aren't enough to tank proceedings.

All in all, 7 ends up being a lucky album as it could have gone off the rails. It's impressive but by Beach House's standard, work is still needed because they don't aspire to reach the bar, they set it. I'd like to see and feel that at least once more in their musical career.

The Interrupters: Fight The Good Fight