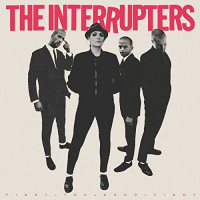 Get ready for quite the pivot, because if you have been following my reviews of The Interrupters’ recorded material and live shows over the last few years, then you know where I am coming from. And here is the general pivot — The Interrupters’ third full-length Fight The Good Fight is good, great actually.

My most consistent criticism of the band’s songs hasn’t been their musicianship or their general performance. Up until this point it had been their lyrical content that I just couldn’t get passed. It just came off as corny, especially with their debut album and their follow up 7-inch. Then Interrupters released their second album Say It Out Loud, which was a major step up musically and lyrically and overall things improved somewhat — tracks like “The Valley” and “On A Turntable” come to mind.

With the release of Fight The Good Fight it is obvious even after just a first listen that everything about the band’s song writing has gotten exponentially better. We got a bit of preview of that notion when they release the singles “She’s Kerosene” and “Title Holder.” “She’s Kerosene” contains The Interrupters’ signature bouncy, ska vibe with a lot more added in. he lead and backing vocals take a huge anthemic turn during the chorus, the bass line is extremely swift and complex, and the guitar fills on top of the upstrokes not only added a lot more character to the song as a whole, but they also is one of the first examples how The Interrupters upped their musicianship through out the record.

Like their other releases, The Interrupters break things up by adding some pop punk tracks into the mix. And just like their ska tunes, they have improved quite a bit. The track “Gave You Everything” is really where lead singer Aimee Interrupter shines. This is the song were you can hear just how wide of a vocal range she has, from her standard upbeat, mid-range vocals in the verses to hitting extremely high notes in the choruses. “Outrage” is a microcosm as to what The Interrupters did right through out all of Fight The Good Fight. It has an incredibly catchy melody, the lead and backing vocals are super tight and the musicianship was taken to a new level. The guitar solo towards the end is full of slick bends and slides and the drums just come off as massive

Now what about the lyrics this time around? I’m pleased to report that for the most part The Interrupters also improved in this area. “She’s Kerosene” has fun metaphorical lines like “I'm A Match/She’s kerosene/You know she’s gonna burn down everything.” “Outrage” especially has clever lines in the chorus such as “They put a mask on to speak their minds/They need to veil to hide behind/The mob mentality, like wolves trapped in a cage/This will go down in history as the age/Of outrage.”

There are a few instances where the lyrics may come off as cliche to some, most interestingly during the melodic punk track “Got Each Other,” which features three members of Rancid taking turns singing one verse each. Lyrically, “Got Each Other” is basically the sister song of “Family” from The Interrupters’ self-titled debut. The words are about welcoming in those who don’t have a family or friends and supporting one another. The beginning lines “If you are alone tonight, you can come with us/If you don’t have friends or family or people that you trust/We will be your confidants, your sisters and your brothers” really encapsulate the theme of it. To those who are skeptical, here is what I would argue: if you think lyrics like these are corny/cliche and just a schtick, The Interrupters are providing something to the punk scene that it doesn’t get a whole lot of these days, and that is a welcoming sense of positivity. Is that really such a bad thing?

With every release The Interrupters make giant leaps in their song writing ability from their musicianship to their lyrics. Fight The Good Fight has taken them from what I consider to be a decent band that is worth paying attention to, to a great band that I have a become a fan of. I would strongly urge those of you who are still skeptical after reading this to give Fight The Good Fight a full listen. The band might take you by surprise with this one like they did with me. Long time fans of the band will undoubtedly be ecstatic with it and will find the album to be a perfect record for the summer.

One question remains to be answered though, between this record, The Might Mighty Bosstones' new album and the Mad Caddies’ recent covers LP being released, could we be witnessing the “Summer Of The Ska Revival” this year?