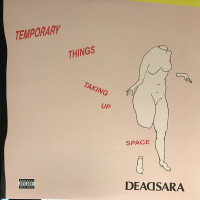 I don’t relish being negative in reviews. I want to champion bands and share with you my enthusiasm over their art. If I take my time to listen to an album, it means something about it has piqued my interest; either I’ve been a fan of the band’s prior work or have found something substantial in a debut. However, the reason we as a community create this content about records is because we crave the truth despite when that opinionated reaction resonates negatively. Anyway, I loved Dead Sara’s eponymous debut. “Weatherman,” “Monumental Holiday,” and “Lemon Scent” were titanic rock songs that found ways to merge ‘90s grunge heavyweights with modern rock filtered through some righteous feminine energy. Emily Armstrong is one of my favorite vocalists, and her passionate, raspy howls recall what Courtney Love could have been had she not shredded her own vocals with years of abuse. Siouxsie Medley is an imitable powerhouse guitar player, alternating crunchy Zeppelin size riffs with more delicate reverb-soaked rhythms when necessary.

However, the years following the promising debut have been plagued by a series of falters. After starting independently, the band signed with Epic in 2013 and began work on follow-up Pleasure to Meet You. Due to some unspecific issues, the band left the label with record in tow and issued the album on their own Pocket Kid Records. Pleasure was a bit of a stylistic mess, with the band trying on various hard rock personas in search of a cohesive vision. The band was finally picked up by Atlantic Records (home to Zeppelin themselves) in 2017 and in 2018 we have the first fruits of that partnership with the EP Temporary Things Taking Up Space.

Unfortunately, what we are plagued with again is another menagerie of hard rock identities that don’t particularly suit the band well. If touchstones like Kings of Leon, Haim, the Pretty Reckless and Halestorm make you wince, then this collection of songs is probably not going to do it for you. “Times to Remember” bears the pastel reverberations of the most recent limp Kings of Leon record WALLS at least buoyed by an earnest vocal performance from Armstrong. “Anybody” traffics in the ‘80s pop rock fetishizations of the Haim sisters with melodic echoes and vocal syncopations that parallel Taylor Swift’s most recent affectations. Medley’s fuzzy guitar line at least salvages the song from being pure by-the-numbers pop rock. “Unamerican” should be the chance for the band to shine with some politically inspired dissonance. However, it’s a swing and a miss. Armstrong whiffs an opportunity to eviscerate the current machismo political movement with sputtering non-sequiturs and vague “fuck off” invitations. Sonically, the guitars are compressed until any warmth or nuance is choked out. The weak attack on Donald Trump comes off as a mere scratch when we are in dire need of a deep laceration. “Heaven’s Got a Back Door” has a genuine conceit where Armstrong rails against a religious upbringing, discovering she’s survived on her own moral compass to this point and wondering if there’s a more circuitous path to enlightenment. Disappointingly, the music cops from the Pretty Reckless’s stomping “Heaven Knows” and comes across as major label influence in search of those elusive Spotify streams.

There are some bright spots. The intro to “What It Takes” finds Armstrong being nakedly confessional and pining for some restorative isolation while buttressed by Medley’s “Maps” invoking guitar line. “One Day We’ll Make It Big” is eager wish fulfillment where a teenage Armstrong and Medley traverse through “abandoned mansions” in Laurel Canyon, dreaming of breaking out of Hollywood and onto the national scene.

Dead Sara continues to be a band with two extremely talented and unique individuals shining through. I’ll continue to anticipate each new release with the hope that the promise of the band’s debut will eventually blossom into a singular vision and identity. Also, if the band can ditch these pop detours and focus on the dinosaur riffing and vocal explosions, they will find themselves on deck to dominate what’s left of modern rock.

The Interrupters: Fight The Good Fight