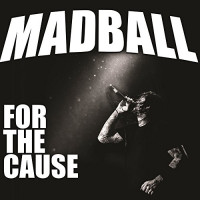 There’s a question of approach when reviewing a record from a band like Madball. Whether you’re a fan or not, there is no denying the legacy of the band at this point in their incredibly long career, especially for a hardcore band. Knocking them in hopes they would put out something drastically different than their brand of bread and butter New York hardcore is a pointless exercise, nor would a change in sound likely gain them any new fans. So, when approaching their 9th full-length album For the Cause, the better question is how does this record fit into their catalogue and will longtime fans find something to enjoy with this release.

On that score, For the Cause is likely to satisfy their fans’ itch for some new Madball in 2018, even if not rising to the top of the best of their post-2000 output. For the Cause acts as a clarion call to stand for something in this life, a familiar theme for Madball, but delivered with a topical urgency given *gestures widely at everything that’s taken place lately*. The album is filled with two-step riffs, pounding drums, gang vocals, and some inspired vocals from guest contributors.

Longtime fans will find what they love about Madball on For the Cause. “Freight Train,” a song with the quintessential Madball sound, contains a punch-forward breakdown sure to get the pit moving before launching into a melodic, half sung closing. Back end cuts like “Es Tu Vida” and the mid-tempo “For You” also highlight what Madball does best. “Es Tu Vida,” a Spanish sung number, contains pummeling guitar riffs that dog pile on top of each. “For You” closes out with gang vocals that come across as somewhere between a Bane and Hazen St. style crossover.

One of the standout features of For the Cause are the guest vocal spots. Ice-T puts his signature touch on “Evil Ways” as the song comes to a screeching halt with him yelling “I’m not the one you want to fuck with or test.” He returns half a minute later on one of the album’s more inspired breakdowns announcing, “these motherfuckers ain’t shit.” Tim Armstrong of Rancid appears on “The Fog,” a working class anthem with a punk rock stomp to it. Armstrong delivers some of his strongest vocals of late snarling at the predatory nature of our financial institutions.

If For the Cause gives Madball a reason to keep the torch burning nearly 25 years after their first full-length, then it’s a worthwhile contribution to their catalogue. If you like Madball, you’ll likely enjoy this. If not, it’s at least worth checking out the two aforementioned tracks to hear their collaborators put their signature spin on Madball’s classic sound.