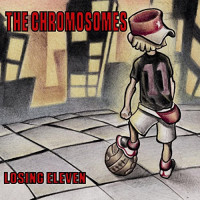 Europe definitely has a thing for Ramones inspired punk rock. When done correctly, it’s god damn awesome. And The Chromosomes from Livorno, Italy have done it right on their 11-track album Losing Eleven.

One could definitely argue that Ramonescore can get old, but if you write good tunes and play tightly, you’re going to catch people’s ear. The band doesn’t stray far from this formula on their newest LP, which provides a cohesive flow. Yet, the songs are unique enough to hold your attention. With super catchy melodies, fun lyrics, and lots of Na-Na-Na’s and other harmonies, every song is a worthy listen. And after just a couple of listens, many of the songs will be stuck in your head, particularly “Watchin’ Airplanes” and “Leavin’ Canada”, just to name a few. The tempo generally stays the same throughout the album, with tons of downstroke, muted guitar in the verses, but the band has the ability and skill to play faster as evident in songs like “Escape From the Orgy of Media.” They can also bring it down to play soft and sweet as heard on the last track “The Age of Summer”, though it builds to a full band sound towards the end of the song.

The Chromosomes have been playing since 1993 and their experience shows on this album. Every song is well written and mixed very well so every instrument is evident, but not overpowering. And while the lead singer does a great job singing in a second language (the accent is slightly audible), it’s the harmonies and all of the background vocals that enhance each song. This is definitely one of my favorite albums that has been released within the last year. Give it a listen!