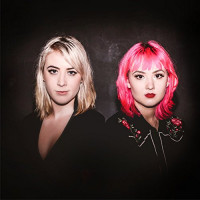 No doubt, this is what Dog Party have been working towards for the past decade. Hit & Run, the duo’s sixth album, finds the band honing their sound into a pointed attack.

As before, the band is rooted in fast charging, three chord chopping. There’s a heavy dose of Ramones influence, or at least an influence of that band’s dedication to simple, but powerful melody. But, while that drives the procession, the looks to other early punk realms, takes some bits from here and there, and then proceeds to search back even further.

The title track is propelled by a jangling, beach guitar that walks a fine line between Patsy Cline and Jan and Dean. But despite the influence, neither “Hit & Run” or anything else on the album smacks of “retro.” Rather, instead of trying to recreate earlier sounds or textures, the band has taken the primal drives of the early rockers and used it to their own device. “Hit & Run,” for example, has the sunny sparkle and softness of 60s am rock, but as Gwendolyn Giles asks an ex-boyfriend, “Tell my why you hit and run?” the whole thing sounds organic.

The works doubly well on the harder charging numbers. “Bad Dream” has that unmistakable fuzzed out, but beefy guitar muscle while drummer Lucy Giles beats on the drums with a fleet footed aggression. Then, on top of that, Lucy drops some nasty, but well placed, swipes , such as “I try to do everything you hate!” There seems to be genuine animus here and it’s telling of the women’s skill that they’re able to take some biting attacks and shape them into something that’s both catchy and identifiable. That is, it’s easy to dis people on a record, but the real trick is getting the listener to side with you instead of being repelled. Both women here are clever enough to paint a picture where neither side of the conflict is a saint, but you want to take their side in the dispute. That’s storytelling.

Unsurprisingly, Hit & Run is the band’s most cohesive record. Centered around breaking up, the record runs the risk of getting stale or of simply being a breakup record. That doesn’t happen. For one thing, at about 24 minutes, the record is over almost as soon as it starts- it gets in, punches up the place, and gets out. Second, they throw around enough whimsy to spice the proceedings up without becoming campy. “Stood Up” blends Motown with Rocket to Russia and it sounds convincing on both sides of the equation.

Dog Party have never tried to hide their influences. But, now more than ever, they’ve made their roots their own and have crafted their sharpest record to date. Six number six is where most bands start to peter out (if they haven’t already). Hit & Run feels like Dog Party not only arriving at their station, but preparing for their own golden era.

Self Defense Family: Have You Considered Punk Music