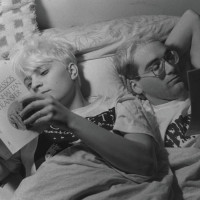 Have You Considered Punk Music (2018)

Self Defense Family, composed of musicians who have on and off contributed to the group over the last eight years, are quite possibly the most prolific band in punk music. Leader and vocalist Patrick Kindlon speak-sings his way through ten songs “punk” in attitude alone. Instead the music lingers, finding its stride in repeated patterns and slow build ups. Sometimes it's jazz-y, other times post-punk, but it’s never conventional. The trumpet on “No Analog Nor Precedent” clearly stands out but doesn’t necessary distract. The sparkly guitar in “Nobody Who Matters Cares” plays against its subject matter but seems to fit correctly. Each song differentiates itself from the one before it, yet this is Self Defense Family’s clearest, most unified statement.

Kindlon writes lyrics like a novel, unpacked by the music around them. Back-to-back tracks “Have You Considered Punk Music” and “Have You Considered Anything Else” are littered with references from Nick Cave to Kate Bush with plenty more that I’m sure went over my head. The title track finds Kindlon ending each thought with “Choke went to Berlin to have his awakening.” Once again, repetition drives home most of SDF’s strongest themes. On “Certainty of Paradise,” Kindlon chants, “I put myself through a thing and I loved it!” He repeats the title of “Nobody Who Matters Cares,” giving the song a hopeless frailty. Even the album's parting words, “Call anyone enough and they’ll answer,” repeat until the end. Never lacking self-awareness, Kindlon shines a light on this quality: “I repeat myself often like a senile Mark Smith.”

Admittedly, Self Defense Family can be a challenging listen. And that seems to be the point. Kindlon sings, “It’s hard to sing those songs people love about people in love,” yet it’s easy to hear this as a calling to those who feel a similar disconnect from popular music’s purposely universal themes. This collective continuously defies the status quo and Have You Considered Punk Music is another successful representative of their never-ending quest.