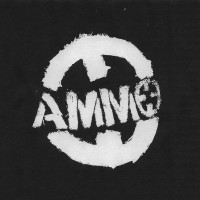 It is with full disclosure that I hadn’t heard of Night Birds until they had signed to Fat Wreck Chords in 2015. Granted, I had seen their name on websites and in record stores, but, never had picked them up. However upon first listen, their sped up influence of Adolescents style punk (RIP Steve Soto) was certainly a fresh take on punk rock, and I dove into their catalog full steam. While I do not listen to them on a daily basis, I certainly have grown to enjoy them, and was very interested to hear guitarist PJ Russo’s hardcore side project, Ammo, in which he handles the vocals.

Ammo’s release is a 6 song EP from this 4 piece band, and from opening track “Nausea Nightmare” the listener is being told that Night Birds, this is not. From the ripping beats, guitar feedback, and even Urban Waste influence of the logo, this EP is a throwback to early hardcore at its finest. Fast, Raw, in your face, and not giving a fuck, these 6 songs go by in the blink of an eye. Many classic early influences can be heard here, from early Agnostic Front, Negative Approach, and the above mentioned Urban Waste, with the occasional ripping guitar solo sprinkled throughout.

While this is only released as a demo for the band, this release could certainly hold up on its own in the hardcore community. Those that are fans of the above mentioned bands will certainly find something to like with Ammo, the only flaw being album length, but, in hardcore, that isn’t a flaw in the least.

Self Defense Family: Have You Considered Punk Music