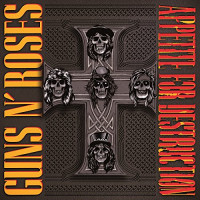 First, the stars in this review concern all the additional material appended to this classic album. Appetite for Destruction is a monster GNR themselves have failed to replicate on further releases. The Super Deluxe Reissue combines most of the material from the GNR Lies EP, some live tracks, and a Sound City session recorded in the lead up to the album’s official setlist.

Let’s go ahead and slaughter that elephant in the room. Axl Rose can be a complete piece of shit. “One in a Million” is an inexcusable piece of garbage and racism that Slash should have never let pass even buried on the Lies EP. Its omission from the Super Deluxe Reissue of Appetite is a paltry attempt at revisionist history, but it is a step in the right direction. Better still would be a complete admission from Axl that he wrote the song as a poor attempt at controversy-baiting as an ignorant overnight success in his 20s. I doubt we’ll get that, but I’ll gladly take its disappearance.

That dealt with, Appetite for Destruction itself is a monolith of rock history something even Dave Grohl would acknowledge even though that video of him, Pat Smear, and the rest of the Foos performing with Axl and company no doubt sent Kurt and Darby spinning in their graves. Despite its ugly attitudes toward women and casual embrace of substance abuse, Appetite is an intoxicating slab of 70s rock barreling over the 80s hair metal clichés of Guns’ contemporaries at the time of its release. It makes existential hedonism sound like an undeniable and inalienable right. “Paradise City” came on at work this week, and my coworker and I could not help but stop what we were doing and help Slash and Izzy with some righteous air guitars (cheesy synth line and whistle be damned).

Guns ‘N Roses cover choices lay bare the lineage of rock ‘n roll they were seeking to tap into. A live version of “Mama Kin” successfully channels Aerosmith’s raucous early years, while “Whole Lotta Rosie” pays perfect tribute to AC/DC’s endearing ode to a lusty overweight groupie. “Jumpin’ Jack Flash” is the most typical connection to the other bad boys of major label rock, and the band gives it their characteristic muscle but still don’t reach the heights of the Stones renditions.

The Sound City Session tracks are interesting if inessential (to casual fans) appendages to the album’s iconic tracks. It’s humbling to realize that these songs obviously went through some extensive workshopping and production polish and didn’t arrive as perfectly executed odes to the wild life right out of the gate. “Nice Boys” and “Reckless Life” are naughty Sunset Strip tributes that portray the allure of the California indulgence in the ‘80s as a teenager or 20 something. Mostly, these tracks are rough early peeks with sagging tempos but does show that the band had a pretty clear vision of where they were headed from the very beginning. “November Rain”’s two incarnations are evidence of Axl’s arena ballad ambitions from the outset. Again, there is nothing earth-shattering in this set, but these early editions are an intriguing preview of seminal classic rock.

As the reunion tours have proven, Buckethead’s pyrotechnics (and any other of Axl’s competent but uninspired hired guns) still can’t hold a candle to Slash’s communion with an electric guitar. The man was born to wring the most classic sounding rock and roll sounds out of the instrument and remains inimitable amongst his peers. To his credit, Axl has one of the most singular and instantly recognizable voices in music even as it has paled in vivaciousness over the years. This is a band that can still make carelessness and frivolity seem like viable choices, even as we see the ravages that debauchery has rendered on their bodies. This ain’t Fugazi; it’s rock and roll as escapism and instant gratification, and I venture to say there’s a time and place for these pleasures. Appetite for Destruction is a reminder to have a little fun once in a while, even if it’s a few brief seconds of air guitar with a coworker.