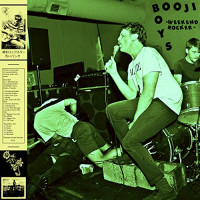 What a ripper. Booji Boys bring something special to the table with their LP, Weekend Rocker. This album is sloppy, yet tight; distorted and raw, yet poppy. It’s a perfect blend of everything right about modern punk.

It is possible to have a pop sensibility while bringing the chaotic, fun nature of 80s hardcore and punk. Songs such as “Piscine Perfect,” “Sister,” and “Locked Up In The City” are serious pop jammers. They give a light air of hopefulness. Sandwiched between all that, though, [[Booji Boys]] lay down tracks such as “Weekend Rocker,” “Crowe’s Kitchen,” and ”Ripper Too” - the songs that reach the edge of pop and really begin to look back upon the harsher tones and formalities of the genre.

This album, released in the final days of 2017, could be the standard set for 2018. Ending Weekend Rocker with the track “Oh Yeah,” gives a finite goodbye; one last breathe to have your say before you’re ready to move on.

Year of the Knife: First State of Aggression

The Crypt Keeper 5: Live in Trenton