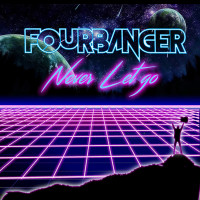 Fourbanger, from Mesa, Arizona has produced an album very reminiscent of ‘90s pop-punk. After somewhat of a hibernation period, the band has returned to make Never Let Go, which contains 11 well-written and tightly played songs.

The band cites Strung Out, Lagwagon, 88 Fingers Louie, and No Use For A Name as significant influences and all of that is clear on this album, specifically in reference to the music. Most notably, many of the guitar riffs seem to be heavy influenced by the tone and structure of some classic Strung Out tunes. In many of the tracks, Fourbanger opens with these riffs. Songs such as “Don’t Stop Running” and “5 Miles Away” are great examples of this.

In reference to speed, most of the songs on this album lean towards the mid-tempo range, though there are a few exceptions to this. Specifically, “The Lonely Parade” really shifts gears and brings it down a lot, using acoustic instruments and very little percussion. On the opposite spectrum, the last track, “The Eagle Has Landed” speeds it up a notch with double-time kick drum during the verses. While there is definitely a cohesive tempo throughout the record (with a few exceptions), the band keeps the audience on their toes with countless breaks before and during many of the choruses,  providing ample opportunity for perfectly timed, high flying jumps.

While the music definitely reminds me of the bands stated above, the vocals remind me of many of the late ‘90s pop-punk bands. This is true on most songs, partially due to the vocal technique of the leader singer, but also because of the harmony tones on many of the choruses. At times, the singer has the ability to sound grittier (see “Dead Sailor) and I was hoping for a little more of this because I think it provides another dimension to the band.

Almost all of the tracks surpass the 3-minute mark, which is due to the band’s focus on catchy and melodic musicianship highlighted by tight drumming. In some cases, the songs are enhanced by a spacy sound that more or less matches the imagery of the album cover. Overall, the lyrics tend to be positive with messages like “...get back up, don’t let her get away…” and “...don’t stop running, the best things are coming.”

In the end, it is clear that the band has worked hard at making an album that they are proud of. With solid musicianship and a true craft for songwriting, pop-punk fans will really enjoy this album!

The Crypt Keeper 5: Live in Trenton

This Obsession: A Confrontational Effort