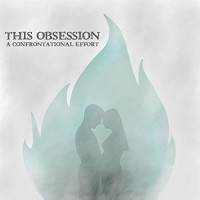 Like almost all pop-punk bands, This Obsession formed in high school over a mutual interest in the local scene and a lack of any musical prowess. Hailing from Chicago, This Obsession also come with a heavy dose of influence from Alkaline Trio. In fact, their name is a play on said band’s album This Addiction which gives a good reference point for the band. After gaining attention in the Chicago scene over the past couple years with a handful of recordings, This Obsession offer us A Confrontational Effort on Wiretap Records.

A Confrontational Effort is the second full length from this Chicago three piece. Recorded with Dan Precision of 88 Fingers Louie at Bombshelter Studios, all of its influences are out in the open on the band’s collective sleeve. This is your standard, by the book pop-punk chock full of relationship strife, random fuck yous, and the occasional toilet humor. In fact, “Shitting” covers all three of these bases with a 30 second ode to past high school acquaintances written on the shitter. Guitarist Mark Kronenberg handles most of the vocals with bassist Jessica Otto occasionally taking lead and offering backing harmonies. Her contributions tend to stand out and they have a good juxtaposition going for them when sharing vocal duties.

It’s hard to understate how much a product of their local scene This Obsession is. In addition to the aforementioned Alkaline Trio worship, you’ll find songs on A Confrontational Effort that wouldn’t sound out of place on an Allister or Much The Same record. There are definitely some catchy numbers found on the release. With an Otto led bridge on “My Own Grave,” you’ll surely be bobbing your head along as she sings “the screaming crows are my alarm / I’ve closed the shades in my bedroom / I’m sick and tired of the sunrise.” “Bottoms Up” and “Deep Water” have a similar effect.

A Confrontational Effort is a decent effort and if you’re a fan of any of the bands mentioned above, you’ll likely find some breakout numbers with this release. The production nicely complements the band’s sound giving their three chord pop-punk a familiar sheen. However, This Obsession’s Chicago horizons have already been seen by many red eyes previously and you might find this much the same.