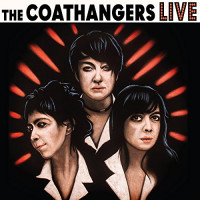 I sometimes wonder if there’s any point to live albums. A part of me isn’t entirely convinced of the need to own another album with all the songs I’ve already heard by this band but played with weaker recording quality and an audience underneath. And yet, I can’t deny that there are some live albums that I absolutely adore, like Against Me!’s 23 Live Sex Acts, The Hold Steady’s A Positive Rage, and of course the greatest artistic masterpiece of all live albums, The Talking Heads’ Stop Making Sense. So I guess I’m of two minds on the subject, because it’s an odd art form but it can be amazing when done right.

Having experienced a Coathangers concert live, I wondered how they were going to translate that into a live album. The Coathangers are one of the best and most underappreciated punk bands out there today, and their live show is incredible, but it’s raw and stark with little banter and a focus on the band just putting their heart and soul into every song. There’s not a lot of flourishes that would make listening to a recording of their live show compelling. And unfortunately, listening to the album didn’t change my mind about this..

The album, simply titled Live, which was originally announced under the much better title of Getting’ Mad and Pumpin’ Iron, is a no nonsense kind of album. It starts out with what very little banter there is on this album: “Hey, we’re The Coathangers from Atlanta, Georgia…” followed by some sort of fast, incoherent mumbling that I’m pretty sure was meant to be incoherent. That’s all the introduction they give before jumping into “Watch Your Back.” I did wonder if, for their live album, they might actually try to stray away from the material from their first few albums when they were a four piece, but they don’t try to avoid those songs, and the keyboards are hardly missed. Actually, I was surprised by some of the song choices. The title track off of their most recent LP, Nosebleed Weekend, for example, which they must have thought highly of if they shot a music video for it, is surprisingly absent from the album.

The one song that really translates very well onto a live album is “Springfield Cannonball,” where the band’s performance becomes delightfully unhinged. Apart from that, The Coathangers put their heads down and barrel through the songs, which makes for a fantastic live performance, but a much less impressive live album. If you’re looking for the live Coathangers experience, you’re much better off skipping the live album and waiting for your opportunity to actually see them live. Trust me, it’s worth it.

This Obsession: A Confrontational Effort