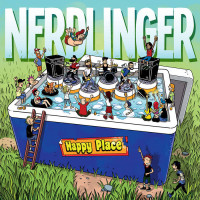 When I was asked if I wanted to write a review for a band with “throwbacks to the best of bands like No Use For a Name and Lagwagon”, I of course jumped all over it. After all, being raised on a steady diet of the classic Fat and Epitaph sound of the 90’s (Shout out to all those bands still crushing it today), I always curious to hear current bands with those influences of the past. So minutes later, the upcoming full length “Happy Place” by Australia’s Nerdlinger was sent to me. The band has been around since 2013, playing over 350 shows all across the continent as well as New Zealand and Japan.

“Happy Place” is the bands’ third album, and first since their 2015 EP “Trendsetter”. Writing a 14 song album is no easy task, and you can tell the band put their blood, sweat and tears into the album, spending a good 2 years in and out of the studio writing and recording this album. That being said, it flows as smooth as a river, with equal parts double time, harmonies, and solos, put enough mid-tempo to show maturity in the quartet.

Opening the album is a 30 second introduction, before getting to the real first song, “Contagious”. With an easy recognizable drum beat to any punker of the 90’s, mixed with a guitar lead that could have come from Enema of the State, Nerdlinger set the tone for the album is going to be: Fast, Melodic, Fun. Following up is “Can Yu Forgive Me”, a mid-tempo rocker that has a vocal delivery quite similar to Roger Lima while fronting Rehasher. “Sails” is a track that certainly earned the NUFAN comparison in the press release, as the melodies and structure would absolutely be Tony Sly approved (RIP).

To go track by track through a 14 track album, wouldn’t do the album a ton of justice, as just based on the first 5 songs, there is a lot to like from this next generation punk rock band. The melodies hit in the all the right places, the solos shred when they need to, and are toned down when appropriate. The album is a try study in every sense from our scene’s elder spokespeople. Around the halfway mark of the album is “Song of The Damned”, which is a slower tune, with some unexpected horns to really keep things interesting before going into the one minute length “Milk” and ending on the fantastic “Superficial”.

At 14 songs, a couple may seem to run into each other, but that doesn’t take away from a solid effort from the quartet. The album drops Friday, July 13th on Disconnect Disconnect Records.