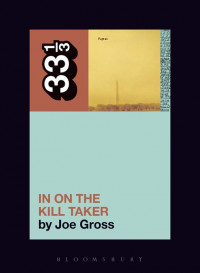 Joe Gross’s history of Fugazi’s In on the Kill Taker is a highly engrossing dissection of one of punk’s essential, iconic works (really nearly every Fugazi album fits this description). Joe Gross in an entertainment critic that has written for the Austin American-Statesman since 2002 in addition to contributing to Rolling Stone, Spin, and other publications. Gross begins his dissection of Kill Taker with an abbreviated history of the band (see also: Our Band Could Be Your Life) and the recordings up until Kill Taker. The band recounts that Repeater was a revelation and agree with its canonical place in DIY music history. However, using the setup for Steady Diet of Nothing minus producer Ted Nicely (a veteran on the music scene who had produced Tommy Keene and owned a local record store), the band felt they created a sterile recording that failed to capture their live energy and was seen as a mild disappointment. The experience led the band to consider outside collaboration, so they called in a favor from Steve Albini.

The band and Albini considered their time together productive but neither party was happy with the recorded outcome. Gross tends to agree with the band and Albini that the demos sounded “off” and concurs that the Niceley version of Kill Taker is far superior. The demos were underground legend for a while until their online leaks exposed them to the wider world. However, I disagree with the author on the quality of the Albini demos. I think they are worth seeking out and beg scrutiny and repeat listens. The leaks of those demos provided us with an intriguing look into the process of a band that was unafraid to explore sonically but never let themselves fly completely off the rails. The Albini demos depict an alternate-reality, unhinged Fugazi and had the album been recorded under his oversight, it would have made for an extremely fascinating listen. That’s not to say the demos replace or are better than the official version of the songs that made it to press, but the tantalizing peek at a different aesthetic direction is compelling.

“Facet Squared” or “flags are such ugly things” is Mackaye’s screed against national pride. Mackaye argues that nations are arbitrary constructs that humanity has created to differentiate ourselves from one another. He recalls as a child waking up and being thankful he lived in the best country in the world, but later in adulthood began to question where that idea originated. He supposes that children waking up in other countries (for example: Belgium) are also similarly convinced through some sort of nationalistic indoctrination that they live in the best country in the world as well. These arbitrary boundaries occasionally lead to shows of strength that result in violence and death with no other seeming cause than to boost morale and shame a created adversary. Therefore, because flags represent these aribitrary delineations between factions of humanity, they are “ugly things” but don’t forget “they should never touch the ground.”

“23 Beats Off” ends side one with a seismic feedback squall outro before the reprieve of Joe Lally’s contribution with “Sweet and Low.” Contrary to online theorists, “23” is not about Magic Johnson but is about AIDS in two other celebrities, Queen’s Freddie Mercury and the tennis player Arthur Ashe. Mackaye dissects the themes of the song as celebrities are forced to deal with the duality of living at “the center / of some ticker tape parade” in addition to being subject to “the center / of some magnifying glass.” The question he poses is whether individuals who have courted fame have the right to die privately. He never arrives at a definitive conclusion, acknowledging that as a human being even a celebrity has a right to privacy but also lamenting the possible positive spotlight that could have been cast on fighting HIV if, in Mercury’s case, he had divulged his struggle sooner. The title of the song is not an interpolation of Magic’s number but is the number of beats Canty fired off before the outro in an early demo of the song. The band decided to keep the working title.

“Cassavetes” is probably the most interesting song on Kill Taker secondary to its off-kilter rhythmic structure and unorthodox (for Fugazi) subject matter in tackling the controversial film star. Picciotto reveals that he had seen a John Cassavetes film (most likely Husbands and A Woman Under the Influence) at the AFI theater in DC and was emotionally jarred by the experience, recounting that his “heart [was] beating like a riot.” What Picciotto and Fugazi were more drawn to with Cassavetes filmography was his insistence of “complete control” over all decisions concerning his films to preserve his personal artistic vision without compromise. Cassavetes used the proceeds from his mainstream Hollywood career to fund his DIY independent film adventures. Gross concedes that the Albini demo of this song is pretty powerful and more chaotic than the Niceley version that made the permanent cut. Gross does acknowledge that some of Cassavetes themes shouldered controversy with artists like Le Tigre criticizing his apparent misogyny.

I won’t spoil the rest of the book. Gross’s illumination of In on the Kill Taker is an engaging recollection of a classic from the punk and alternative underground in 1993. It certainly provides some insight and background to some of Fugazi’s cryptic lyrical musings without shattering the myth. I think the clarity gained from this study provides greater resonance to an already sterling set of songs.

Lilys: In the Presence of Nothing