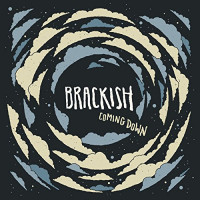 It’s hard to write a review on an up and coming band in the Philadelphia scene and not mention The Menzingers. It’s a testament to the band that got their start in Philadelphia house shows and the scene that has subsequently been lifted up with their success. A rising tide lifts all boats indeed. However, with Brackish’s Coming Down, this mention is not without merit as Tom May assisted as an audio engineer to the Andy Clarke produced release in the Philadelphia-based Retro City Studios.

That’s where the references to Philadelphia will stop and this review will travel across the Ben Franklin Bridge to Jersey. Brackish are a 4-piece band who have roots in New Jersey and they are clearly worn on their sleeve and explored with Coming Down. The 3-song EP is dedicated to their late guitarist and wrote with an ear towards the music the band was raised on.

Closing track “Coming Down” is the focal point of this release. The distorted guitars have an early Thursday-esque quality to them making it the darkest song here. The lyrics lay out a story of addiction, struggling to come to terms with a friend who disappeared long before they actually disappeared. The chorus has guitarist and singer Connor Byrne pleading “where are you / we can’t say the words enough / we’ve all but given up,” These are sure to resonate with anybody who’s seen someone they love succumb to these demons.

“Teflon” and “Matter” strike a lighter tone musically coming across as a mix between Midtown’s earliest output and Saves The Day’s At Your Funeral. They are both high-energy rockers, especially “Teflon.” Despite a happier sound in tone, the lyrical topics deal with isolation and apathy in friendship almost hinting at what’s to come in in the final track.

Overall, Coming Down is a well-tracked release that shows Brackish have the chops to reflect on where they came from without cheap imitation and the ability to tackle one of the above-mentioned region’s most troubling issues.

Lilys: In the Presence of Nothing