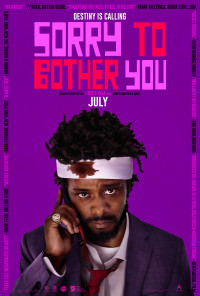 Few movies are as pure as Boots Riley’s Sorry to Bother You. One of the detriments of the modern movie age is that, due to the skyrocketing costs of films, every movie just has too many cooks. Financiers, marketers, writers, executive producers, focus groups, all have to get their say. And as you know, that leads to a lot of mishy mushy movies that are as bland as they are generic. Luckily for us Riley is a determined kind of guy and so after nearly a decade of trying to get this movie made, the rapper-turned-director has created a world that feels like Riley simply cracked open his brain and let us walk around. And if you are a fan of the Coup, you know what a magical place that is.

Sorry follows the story of Cassius Green (played by the affable and relatable Lakeith Stanfield) who lives with his girlfriend (an artsy and charming Tessa Thompson) in an Oakland garage attached to the house owned by his Uncle- and, of course, the bank is foreclosing. Green takes a job as a telemarketer to make some bucks, and after following the advice of a wizened and perennially likeable Danny Glover, starts talking in a “white voice” to prospective customers instead of his normal “black voice.” Of course, sales skyrocket for Green and he finds his way up the company ladder… and then things go REALLY wonky. I’d like to tell you more, but half of the fun of this film is watching it weave magical realism with straight-up realism, resulting in a film that feels like its rooting for the common man while elements of Narnia, Idiocracy, and Hellraiser seep through. Half the fun is finding the secrets and tricks packed into the two hours and boy are there a lot of them.

Riley, who has fronted Oakland’s radically left Hip Hop collective the Coup for nearly 30 years, sits in for the first time as director. Life experience beats book learnin’ every time and Riley directs the film with the ease, confidence, and frankly whimsy, or champs like Scorsese and Gilliam. Every detail has been combed over and as Riley takes us through his version of Oakland, he fives the film room to breathe. Instead of plot-point-driving-plot-point, we have a few minutes to learn about our characters who evolve from talking script lines to three-dimensional creatures. Green, for example, resents his uncle for giving him a beat up car, but refuses to give it up. He also lets selfishness sometimes cloud his better judgment, but we still like him because he’s a human and not a stick figure. Thompson as Detroit (perhaps based off Riley’s own partner Gabby Lala) creates unsettling art that makes bold points, but also is willing to humiliate herself in the name of the pursuant. She’s not perfect either, but we like her too, because, as before, she’s human. This is a film that paints a picture as much as it tells a story, making the whole things end result more of a work to be pondered and interpreted than a mere popcorn-chomper. This is the kind of thing that last decades.

(As a side note, it’s fun to spot Riley’s homage to his work in the Coup. “Your parent’s Cocaine,” “Freestylin at the Fortune 500 club,” “Cars & Shoes,” and “We’re all VIPS” all make appearances in some form.)

Riley makes some bold choices in Sorry. Where it appears that film will follow the standard track of a genre film, he suddenly changes lanes and tilts the film in another direction, giving it an original and unique bend. There are moments of comedy, drama, and at times, sheer terror- for real, there are a few scenes in this film that are genuinely unsettling, in part, because they follow “yuk yuk” scenes that happened just five minutes prior. Riley is daring in these swings and it pays off.

Most importantly is that by the end of the film, Riley spells out a few things that are indeed horrifying- and despite the otherworldliness parts of some scenes- the scary things are scary because they are happening in this world, right here, and people don’t really seem to care. Sorry is a film that weaves whimsy with profundity and doesn’t pull punches when it comes to exploring the darkness 21st century man. The fact that it’s still damn fun underscores the talent, vision, and confidence of everyone here. There has not been a film like Sorry to Bother You before, and if there is any justice in this world, this film will be a landmark film that instructs filmmakers and consumers alike in the years to come. Of course, if you are a Coup fan at all, you know that Riley often argues that the only justice you’ll see in your lifetime is justice that you make for yourself, so, you know what to do.