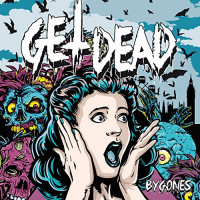 In 2013 Get Dead released their first full-length Bad News and then in 2016 they released their second full-length Honesty Lives Elsewhere. In between those two albums the band released a four-song 7-inch called
Get Dead starts Bygones off with the track “No High Road.” This is where the band sort of falls into the folk punk category. It is drum-less and is based more on an acoustic guitar with the addition of a horn section. “No High Road” is one Get Dead’s more mellow tunes, but that doesn’t stop Sam King from belting out some pretty intense and raspy lead vocals. “Pre-Medicated Murder” fit right into the ska/reggae category. The typical reggae song has more softer and fuller guitars, but “Pre-Medicated Murder” is a bit updated in that the guitars sound much more jangly, The title track is classic Get Dead and is a good sample of the kind of overall direction the band goes in with Honesty Lives Elsewhere. “Bygones” is hard-hitting melodic punk track where once again Sam King masterful vocals take the spotlight, but it’s also the great guitar and bass licks that race passed each other in the background. The band ends this EP with “Cousin Marvin,” which for the most part is this slow acoustic guitar-based tune that switches between a ska sound to a more straight forward strumming pattern and back.

Bygones is a release in Get Dead’s discography that exemplifies how versatile their song writing can be. The band can write awesome songs that rock and they can also write songs that are a lot more cooled off equally well. This 7-inch is a very solid “Get Dead sampler” especially if you are just beginning to get into them.