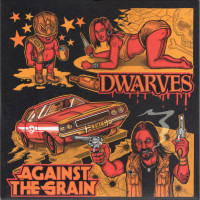 The Dwarves / Against The Grain

This is the fourth installment of the Split Hits the Fans series of 7 inches from Indiana’s Failure Records & Tapes. It once again pairs an established punk act with a Midwest based band on the rise. I’ve been compulsively collecting this series, and overall this just might be the strongest one yet. Of course I might be a little biased, as I’m a longtime fan of both bands individually.

The new Dwarves album is fantastic. Take Back the Night is among my favorite releases of 2018. If you disagree, chances are pretty good that it has little to do with the music. Side A of this split is two songs from that record. First up is the title track, “Take Back the Night”. It’s a great song, even if it’s got a riff that reminds me a bit of “We Must Have Blood”. I recognize that their type of humor and social commentary doesn’t work for everyone, but I have no axe to grind with the band. The Dwarves do dark satire better than just about anybody. The harsh “It’s You I Don’t Believe” rounds out their side of the record.

Against The Grain’s new album, Cheated Death, is also among my favorites of 2018. Here the Detroit quartet offers up two brand new songs, and they’re both rippers. ATG have always embraced the term speedrock to describe their style. Early on, they were a more of a punk/metal hybrid. In more recent years, they’ve gravitated more toward stoner metal. While I still like the band a lot, I’ve missed that primal punk influence. “Don’t Come Back” and “Hard Attack” are a throwback to that sound, while still incorporating the dual guitar leads that have defined their more recent LPs. Both songs are short, fast, and right to the point.

My only complaint, and it’s a minor one, is that we don’t get an unreleased Dwarves track. I suppose the fact that Failure was able to get The Dwarves at all is a testament to this feisty upstart. Like the other entries in the Split Hits the Fans series, this is limited to 500 on random color vinyl. (I got dark purple.) The artwork on this thing is really nice too. The bottom line is that this is a cool little record for fans of either band.