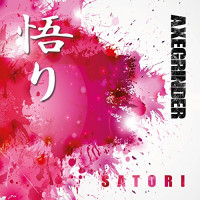 Axegrinder may have taken 30 years off since their previous release, 1988’s Rise Of the Serpent Men, but hearing 2018’s Satori, you’d never know it. And while other bands of yesteryear may have opted to alter their sound to suit the trends of today, Axegrinder pick up right where they left off, with great results. Satori is classic industrial-goth rock for the modern day.

The opening intro is a somewhat typical ominous crescendo, with a spoken monologue delivered atop chorales, square synth waves, and a simple piano melody. Toward the end, the guitar is plugged in and turned up just in time to lead into “Halo (Snakes For the Breeding)” an effective, if uncomplex, industrial anthem with powerful drums and Robert Smith-esque wordplay (“There is no god/god is me”)

“The Unthinkable” uses the same simple fuzzy guitar and heavy double-kick musical formula as most of the record, while melodically and lyrically standing out as single-worthy. “Over” is a biting dissertation on government waste and environmental crimes, which the scaled back instrumentation allows to stand front and center.

The vintage styling here is perhaps most prevalent on “The Hurting”. The producer has a good deal of fun here taking us back to the 80’s, frequently panning the lead vocals and bringing up only the wet reverb returns on the backing. This mixing technique that was often used by groups like Throbbing Gristle and Ministry is a bold choice to stick to the plan.

On the title track, things get a bit, dare I say, sunnier. “Satori” is the most layered track on the record. The bright, subtle synth work and melodic hooks will stick with you. And the lyrics actually offer an uplifting message (“All those years of hate/are cages we are laid in”, “This is the awakening of love”).

The closer “Too Far From Home” offers more of the thoughtful processor work found on “The Hurting” and elsewhere; plenty of pans, verbs, and flanges. At the same time, it’s pristine words of the feeling of isolation out in the world prove to be the most memorable of the record. Even tough guys miss their homes sometimes.

The Dwarves/Against The Grain: Split Hits the Fans [7-inch]