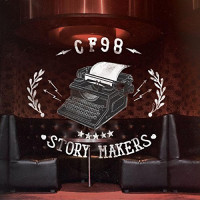 Barely one generation into their (latest) sovereignty, Poland continues to fight for their identity. Economic growth has been steady, but slower than other former Eastern Bloc nations, especially after the US-triggered recession of 2008. Suitable housing is scarce; polio is still a thing.

Known for having one of Europe’s most dedicated punk and hardcore fan bases, it’s the Polish youth who are standing tall and finding their voice, through all of the modern troubles.

The arts are not unaffected by the post-communist gender inequality in the Polish workplace. On CF98’s fifth album (and first in English), singer Karolina Duszkiewicz is using her voice to remind Poland, and the rest of the world, that the kids, and the women, will have their say.

On a record of classic melodic hardcore, Story Makers weaves tales of positivity, friendship, respect to musical roots, and perhaps most importantly, equality for all. And in a nation currently in the grips of a far-right leaning government, that message can not be understated.

“Shit Will Surface” does what many American hardcore songs do; calls out the fence sitters and the half assed friends. Perhaps it’s the strict rule-following of writing in one’s second language, but here the message is delivered with such eloquence, that the listener actually takes it quite seriously.

These days, one might expect a song titled “45” to be another attack on a certain Cheeto-in-chief. But the song is actually a quite personal take on aging and abandoning ones fears in order to pursue dreams. As someone who is approaching middle age (or is already past it, depending on which of my doctors you ask), lines like “Nothing changed my mind/I’m still here and this is my voice”, delivered over incredible instrument work with Karolina’s strong vocals, help this reviewer throw away any inclinations that I’m wasting my time on punk rock.

“Small Town Heroes” is an unforgettable ode to keeping ones perspective in check. You may not change the entire world, but the “small things we do are actually ok.”

“Bigger Business” comes off as delightfully pop-punk, but simultaneously it’s the most verbally scathing track here. The drums and guitars may not be delivering their hardest, but Karolina is delivering an all out attack on the military industrial complex.

CF98 may be making musical waves across Europe, but they’re not forgetting where they came from, nor that they’re not very far removed from their fans. The tile track hopes to inspire these more of these fans to stand up and speak out. And “Whiskey and Wine” lays out a groovy, honky-tonk dedication to keeping your friends close.

If you’re like me and nostalgic for the greatest decade ever, “90s” is sure to be one of your favorites. The first verse reads like a meme that someone my age would put on Facebook. Later on there’s great lyrical shoutouts to bands like No Doubt, before finishing by reciting the chorus to “I Want It That Way.” Sure, there’s nothing ‘punk rock’ about the Backstreet Boys, but there is plenty ‘punk rock’ about knowing that music is music and loving whatever the hell band you want to.

In terms of melodic hardcore, CF98 are doing it better than almost anyone out there. The songs have length and structure to them. The musicianship is multi-dimensional; these Pols are not satisfied with three chords and the truth. Five albums in, CF98 are only getting better. The Polish language can be nearly impossible to decipher, let alone shout along to, for us Romance speakers. But consider Story Makers their gift to us. It should serve as a loud, fun, incredible wake up call to reach beyond your own borders.

The Replacements: For Sale: Live at Maxwells 1986