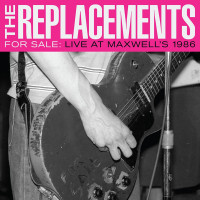 It’s no secret that through the Replacements initial run back in the 80’s the quality of their live shows varied every night. Sometimes you would catch the band when they were on absolute fire and it was like nothing you’d ever seen. On the other end of that though you could be in for a night of intoxicated, half-assed covers (as well as a couple butchered originals) but no matter which version of the Replacements fans got one thing is for certain for anyone who got a chance to catch them: they never forgot it.

Thankfully for those of us who never got the chance to catch the college rock Gods live Rhino recently released For Sale: Live at Maxwell’s 1986. For Sale is a live album from the bands 1986 performance at the legendary Maxwell’s in Hoboken, New Jersey and as luck would have it, they we’re on fire that night. What you get with this live album is 29 songs spanning the entire Bob Stinson era of the band as well a few covers for good measure (what’s a ‘mats show without a few of them?).

While this particular concert has been fan favorite bootleg that has circulated for years, the sound quality of this official release really shows off what a solid band the Replacements could truly be. The guitar work of founding member Bob Stinson (who was booted from the band later that year) is a highlight of “For Sale” and serves as a reminder for fans of just what a unconventional and unique guitar player he truly was. The energy of the performance from all four band members breathes a raw life into the songs that you just can’t capture in the studio. They play every song like it’s an anthem.

If the music wasn’t enough for you the album is packaged with some great rare photos of the band as well as liner notes written by Bob Mehr, author of the 2016 Replacements bio “Trouble Boys”. This is definitely a physical copy kind of release. “For Sale” is one of the best live albums released in a long time and this one specifically is as good as it gets for hearing what the ‘mats could sound like on a good night. For Sale does nothing short of justify the legendary status that the Replacements receive all these years later.