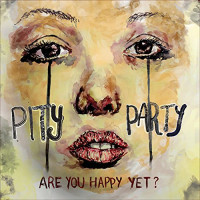 Earlier this year I would see the Oakland, CA band Pity Party pop up on my social media accounts from time to time. There seemed to be quite a bit of talk about their new Are You Happy Yet? EP. I decided to finally give the four-song release a listen. Before I pressed play, I noticed that in the band’s description on their Bandcamp page that they describe their sound as “emo pop punk.” The emo sub-genre is one that I have never really been a fan of, but that combination intrigued me and what came out of the speakers was pleasantly surprising

While you can definitely hear the emo influence in the lyrics and sound through out this EP, much more of the band’s pop punk side bursts out at you especially when it comes to the tracks “Trap House Xmas” and “Grindmother.” “Traphouse Xmas” starts the EP out on a very powerful and upbeat note. Lead singer, Sarah Levy's vocals quickly change from soft to hard-hitting and back as the rest of the band follows. There’s great use of swift fills in between her vocals coming for the guitar as well as descending octaves that make for very catchy transitions between lyrics. Of the four songs on this release it is probably the one that stands out the most.

You can hear a lot more of Pity Party’s emo side in the other two songs “Pop Song 4-Evr” and “Dank Sinatra.” The track “Pop Song 4-Evr” begins with a pretty straightforward palming-muting from the guitars and a mid-level tempo from the rest of the band, but once again it is Sarah Levy’s vocals that truly stand out. This time though, her voice is much softer and soothing. As the song goes on though, it begins to build up with the drums playing a more complex beat, the guitars plucking small note patterns and Sarah’s voice fills with tension and anxiety even. In a way, “Pop Song 4-Evr” seems to be the sonic counterbalance to “Traphouse Xmas.”

After being pretty impressed with the Are You Happy Yet? EP, I’ll be sure to give even more of Pity Party’s discography a shot (their 2016 album Gnarbage is quite good as well). Whether you are more into pop punk or emo or both, give Pity Party a chance if you haven’t yet. This 7-inch seems to be a pretty good introduction to this up-and-coming band's material.