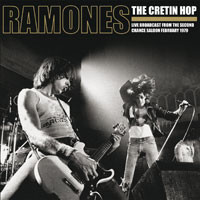 For people who are unfamiliar with this album, let me just say that this album is recommended if you love the Ramones' early music. This is a live album released in 2012 that was recorded in 1979 at The Second Chance Saloon in Ann Arbor, Michigan.  The album also includes recordings of the band playing on various tv shows in the 1990s. The things that stand out to me about this album are the drums and guitar. The drums keep a fast pace through the entire concert and the guitar is hard-hitting. Even though this album pretty long, the bandmates say very little in between songs. Like most performances by the Ramones, Dee Dee yells "1, 2, 3, 4" to start every song. Joey's vocals are wild and on some songs uses echo effects. While the bass insist as loud as some of the other instruments, you can still tell how hard Dee Dee is strumming his bass. This album is one of those albums that is better when you listen to the overall performance than a few of the songs off of it. The song that stood out to me as being the best was the version of "Chinese Rocks". I prefer the rawness of this version and Joey's vocals more than the off End of the Century. Some listeners may want to own this album because it contains a version of the song "Bad Brain" which I've heard is rarely performed live. One thing that may turn some listeners off about this album is the sound quality. I think it sounds okay but some people think the sound quality is bad. I would highly recommend this album if this sounds like an album for you.