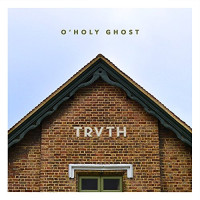 Time for another instalment in my (inadvertent) series of British punk bands that are as of yet, largely unknown on the other side of the Atlantic. O’Holy Ghost are a 4-piece indie-inflected punk band, based in London and this is their debut EP – made up of 6 songs written and recorded between 2016-2018 and recorded by Joe Watson  (drummer of London punk luminaries, Apologies, I Have None). The band are made up of James Farrelly (guitar/vocals), Tom Maguire (drums), Greg O’Grady (bass) all ex-members of British Teeth – joined by Darren Smith, the other half of the dual-singer-songwriter fronting of the band.

It’s probably fair to say that (along with most people in the punk community) O’Holy Ghost are fans of the Menzingers. That’s not a problem, so long as you’re not directly aping them and if you have the songwriting chops to stand on your own two feet. Luckily, I’d say that OHG are able to do both of these things. Although there are notable similarities (chunky yet bright rhythm guitar with melodic clean leads, 2 interchangeable vocalists, a willingness to be lyrically open and honest…), the overall sound of the EP is actually more idiosyncratic than that overview might suggest. For example, opener (and highlight) ‘Across the Pond’ features a harmonica track deep in the mix, which, when set behind references to the protagonist’s frustration and disenfranchisement with their small town Irish Catholic upbringing is genuinely effective and feels absolutely authentic. The song carries a good mid-tempo pace, gives itself space to breathe where necessary and when it really lets go in the chorus, it’s nearly impossible not to sing along.

Track 2 and the first of Smith’s songs on the record is ‘Grunger’. A slower, more introspective track, whose bass/drum intro and driving guitar line does certainly have a Rented World-era Menzingers feel, but Smith’s fragile delivery of the “You kept me up all night; no that don’t seem fair” refrain skilfully brings a more delicate aspect to the fore. Although the variation in delivery is interesting, the overall lyrical content of the song could possibly be described as modest - though this is not the case of the release as a whole.

The EP’s 6 tracks deal with a broad spectrum of subjects including insomnia, divorce, lamenting the loss of friends and various other sources of the general malaise of modern life that most people will encounter, or at least be able to relate to at some point or another. Lyrically, there are some great lines and some of the ideas are well thought-out, but we’re not quite in the same ball-park as the whiskey-soaked, sepia-tinged romanticism of some of the band’s heroes.

Without dissecting every song, I think it’s possible to concisely articulate my feelings on this release – which is that when the band pick up the pace (single ‘I am a Jinx’ is another good example along with ‘Across the Pond’ and ‘Tio’), then the strength of melody and song structure is enough to sweep the songs along with just the sort of energy that I love in modern British punk. I also think that the dual vocal approach works well. Smith, as I mentioned earlier, certainly has a more subtle vocal style than Farrelly, but the contrast adds a dimension that simply wouldn’t be there if only one of the guitarists were taking on vocal duties. Though credit where it’s due, Farrelly’s raw, earthy, yet occasionally sing-song vocal performance is at times nothing short of swashbuckling and gives a real boost to those moments I mention above – which is where the real strength of this release lies, to my mind.

So if you have a love of catchy, almost folk-tinged indie punk, then I’d recommend giving this a go. It’s not the finished article by any means, but as a starting point for a new band, I’m impressed. It’s also great to hear a British band using their own accents instead of falling into the classic Americanisation that so many do. Finally, their use of melody and ability to write huge choruses bodes well for live performances as well. With any luck, I’ll be able to confirm that hypotheses before long.