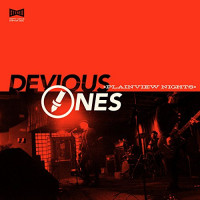 Devious Ones play a style of punky power pop that is not particularly fashionable at the moment. After listening to Plainview Nights, I’m convinced that it should be. The Detroit quartet is made up of Motor City punk veterans doing something refreshingly different. After a handful of vinyl singles, we finally get a full length. They sound like a mix of great ‘60s bands like The Kinks and The Who, and early punk bands like the Buzzcocks and The Dickies. You’d better throw in some poppier ‘70s stuff like Cheap Trick and The Knack, and maybe just a touch of Motown soul too. There is an undeniable sense of fun. What you won’t hear are any of the heavy metal type of guitar tones that long ago infiltrated punk.

Side A opener “Trouble Seems to Find Me” is a bouncy earworm. It might be the catchiest song on an album crammed with catchy songs. The next track, “Garbagepicker", is not far behind. The guitar is overdriven but never harshly distorted. The lead vocals are in a fairly high register and are never even slightly gruff. The lyrics are simple, but usually clever too. The intentionally repetitive verses always lead back to the catchy choruses. “Eyes Off You" is an unabashed, upbeat love song. The title track closes the first half of the record, and musically stretches things out a bit. It will take you back to hanging out with your friends during the carefree summer days of your youth.

Plainview Nights has a warm fuzziness that could only come from being recorded on vintage equipment using vintage instruments. (Unless there’s some very impressive studio trickery involved.) Side B has plenty of catchy highlights too. “Young Relic” perfectly describes how us old folks feel when we see young folks acting old. “Djarum Summer" was previously released as a single, and talks about growing up punk in the ‘80s. “Tumbleweeds” couldn’t possibly be about Detroit. Closer “Rust is Imminent" is another previously released single, and is a worthy tribute to life in the Midwest. It can be difficult, but ultimately it’s home.

Devious Ones incorporate many of the same elements as modern pop punk, yet they sound nothing like it. It’s like they went down a completely different evolutionary path. They’re firmly rooted in the ‘70s, but they’re really an idealized version of that sound. Put down those Guardians of the Galaxy fake mixtapes kids, and listen to this instead. Fans of garage rock and power pop are going to love this. I’ve had a hard time getting this off my turntable. It’s become the soundtrack for my summer. Plainview Nights is limited to 500 black copies and 100 Coke bottle clear copies, all hand numbered. Don’t sleep on it.

Blaming You: Welcome To Life