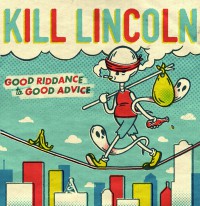 The fledgling ska-punk label Bad Time Records has decided to re-release Good Riddance to Good Advice by Kill Lincoln on vinyl. Originally released over 3 years ago, the band and the label felt it was a bit rushed and wanted to give it a proper release on colored wax with bonus material on the b-side.


The basic goal of the label is to highlight what they feel are the best examples of the up and coming ska-punk bands and Good Riddance to Good Advice is a great illustration of that goal. The album starts off with a sub-2-minute instrumental  that gives you a good idea of what to expect. The track is very horn heavy. And like the rest of the album, the horns are very prevalent during the punk parts and not solely during the ska parts. Often times the horns provide background melodies and fills, in between the vocals.

The title track is pretty much what you’d expect from a horn-laden ska-punk band. Ska during the verse, which leads to a heavier, punk infused pre-chorus and chorus with some gang vocals. But the other tracks lean more towards the punk aspect of ska-punk. “Days I Spent Inside”, “$8 Beer Night”, and “I'm Getting Too Old For This Shit” are all great examples of this. The songs are all pretty complex, so ska is included sometimes, but overall they are punk-heavy tunes with catchy singalongs and fast rhythms. Because of this, all of these songs are 4 minutes or more. The only time the band strays a little on the a-side is on the track “Fire Starter”, which tracks in under 2 minutes. It’s a hardcore song with horns that eventually leads to a ska breakdown. A bit of a departure, but a cool song.

The flip side contains my favorite track on this release, “Second Cities”. Fans of Less Than Jake will most likely enjoy this song as well. This track and the rest of the b-side is the bonus material that was originally released digitally last year. The other bonus tracks were recorded live in Kansas City. And while I typically don’t gravitate to live songs, these tracks offer a pretty good view of what to expect when you see the band in person.

This was my first taste of Kill Lincoln and overall, I really enjoyed this album. The song structure and instrumentation varies greatly and this release offers a good view of the range of this DC-based band. My only gripe with the album (and probably the only reason I rated it less than 4 stars) is that it’s a compilation of 2 previous releases, though it makes sense from a band and a label perspective. In other words, this band is pretty damn good and I want to hear more!