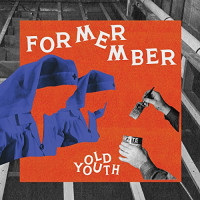 There’s always reason to celebrate a new album from Jason Shevchuk and his new project under the Former Member moniker is no exception. His collaborative album with producer extraordinaire Will Yip (Menzingers, Tigers Jaw, Quicksand, Turnover, Code Orange – just a few from last year) is both well executed and aptly named, Old Youth.

Fans of Shevchuk’s past work, especially the most recent None More Black album, are going to find plenty to love on Old Youth. His unmistakable and wonderfully raspy vocals are front and center, as is his straightforward songwriting. “Morocco at Two in the Morning” settles into an aural space he knows well, while “Double Scoop of Trouble (Looking For a Cone)” proves Yip knows his way around a drum kit as well as the boards.

It’s the back half of Old Youth that has the two at their more experimental. “The Fall For Fergie Jenkins” is a jumpier number that sounds like Shevchuk but with a slicker coating. “Goat of Dover” has a dancier vibe thanks to Yip, before the hook darkens the mood, “Do we really own it? The world we think is ours.” “Prospector,” the album’s best track finds the happy medium of past and present. Shevchuk sings, “I wish that I knew now what I’ll know in the future […] my bags of tricks is emptied out,” implying that while he’s not done, he’s not the kid he was in Kid Dynamite.

Former Member is an accurate title for a man who’s been in two bands he will never leave the shadow of. And while the duo proves to be a well-matched pair, Old Youth doesn’t rival any of Shevchuk’s best work. Still, there’s something magical every time that raspy, melodic voice fills the speakers.