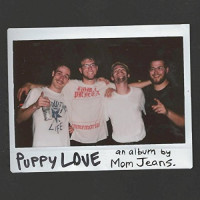 It seems there's a new emo revival. We had the indie DIY run of bands like Modern Baseball and The Hotelier, to name a few, in recently years and now it seems there's a pop-emo revival swinging back around. Look no further than Remo Drive and last year's Greatest Hits. Actually... wait... look one step further and that's where you'll find Mom Jeans.

This is a band I've had quite an affinity for since I heard best buds -- a frenzied take on indie/pop-punk/match rock. Come puppy love, it's much of the same but with a more carefree haze. When you listen to songs like "sponsor me tape" and "glamorous" you'll understand my Remo Drive comparison: mathy, winding guitars with upbeat pop beats (think Tiny Moving Parts meets Free Throw). Throw in catchy lyrics (brutally honest ones) and a fuck ton of teen angst and you'll get the picture (e.g. the acoustic "now this is POD racing").

Overall, Mom Jeans sound like something Runaway Brother and Just Friends cooked up for fans who know that indie wasn't just meant to be depressive tunes. Oh, don't get me wrong, there's a lot of American Football stuck in the mix to make sure it isn't too much fun, but what this really helps build is balance.


"jon bong jovi" is a tongue-in-cheek jam, filled with horns and mathy riffs but like a sped-up American Football; something Mike Kinsella would appreciate, especially because the music's so dynamic and infectious. In short, if you're looking for emo to make you smile and feel the sun on your face, trust me, puppy love is the record for you. It loses you a bit in the middle but there are more than enough songs filled with warmth and endearment to cover everything else. The next record will be the true test I think so I can't wait to see what they churn out. Until then, bask in the glow here.