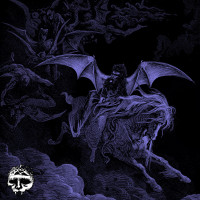 One of Integrity’s greatest contributions to the punk/metal scene was subversion. When hardcore was becoming stale chugga-chugga-chuggas, Integrity released the defiantly metal Systems Overload that featured *gasp* guitar solos. Then, just after that, they released Humanity is the Devil which featured a Side B that was essentially a spoken word ambient track about the nature of humanity itself. Then, after that, they kept the pendulum swinging by releasing tracks that were both straightforward (“Rise,” “Beasts as Gods”) and ones that seemed batshit crazy (the Jonestown sampling “Burning Flesh children to mist,” a cover of Billy Idol’s “Dancing with myself.” )

This was ever apparent with the release of their stellar (or cosmic?) LP Howling, for the Nightmare Shall Consume which featured Integrity mastermind Dwid Hellion bringing his thesis about the human condition to full detail while guitarist Dom Romeo layered solo on top of solo on top of solo until the spiraling ball of an album felt like it was breaking apart at its very seams. So… um… what do you do after that?

The general wisdom would be “release a new album, either directly copying the previous one OR release a radically different album.” David Bowie, the Rolling Stones, the Clash, Crass, Bauhaus, Slayer and many more used both of these options to great success, mind you, so there's no shame in that method. But, ever the black sheep, Integrity have forged the third route.

Instead of a following a massive platter with another massive platter, Integrity shoots for the compact. At a mere four tracks clocking in at around 10 minutes, their side of the split seems, dare I say, minimalist in nature. Howling had three tracks nearing or exceeding seven minutes, and the whole release reveled in a certain excess. But here, the two originals, “Scorched Earth,” “Flames of the Immortal” use a Spartan attack, both hitting just about two minutes. Hellion follows up on the theme from the previous album and spends the time detailing just how bad and diseased of an animal humanity is. Interestingly, the concept of the flame is used on both tracks (and maybe even the third) and it is described as a tool of positive annihilation. That is, positive in the sense of “good” and not “total,” though total annihilation seems to be Hellion’s goal.

Once again, metal maniac Dom Romeo lays down his 80s guitar solos which touch upon classic thrash, classic NWOBHM, and classic hardcore, and we are all that much the better for it. Hellion thrives in a charging attack that is both heavy and rapid, and Romeo brings out the best aspects of both of those traits.

The two covers are interesting choices as well. “Sons of Satan” is a revved up metal version of a track originally by Hellion’s noise project Vermapyre, which nicely tags onto the theme proper of the EP. Meanwhile, the cover of G.I.S.M.’s “Document One” cleverly reveals some of the gears behind the band. Integrity has often added wierd elements into their songs for effect- creepy animal noises, serial killer confessions- but it appears that concept wasn’t created in a vacuum. G.I.S.M. themselves were a very weird band, what with their seemingly cut and paste lyrics, their conspiracy theories, and the blending of Motley Crue styles with Slayer-ish vocals. Integrity has fun locking the disparate together here and showing just how easy it really is to “break the rules” and how few other artists really take the chance. Romeo also appears to have a blast with these rollercoaster glam-riffs. Integrity’s half of this split supplements their most recent work by both boiling down its core message to two punchy tracks and by showing the garden from which it grew.

For their part, Krieg crank out a new tune and reworkings of two older tracks. “Circle of Guilt” is metal rumbler in the classic sense with lumbering riffs, haunting backdrops, and growled lyrics. Coincidentally, vocalist “N” has a distinct vocal resemblance to G.I.S.M.’s Sakevi. “Circle of Guilt” is clearly designed as a fan pleaser in that the band lashes out propulsive riffs while N ominously issues proclamations over the top. Perhaps in contrast to Integrity’s tearing down of genre, Krieg makes the opposite argument by taking Death Metal’s hallmarks and burnishing them to their sharpest sense.

The same can be said for the re-working of “This Time I’ll leave you to drown” and the live cut of “The sick winds stir the cold dawn.” This is a death metal band doing death metal in the contemporary sense. The band isn’t afraid of good production and they benefit because of it. There are a lot of tiny details and nuances hidden underneath the bleak crushing, and those tiny ornaments are what keeps the classic style here sounding fresh and veteran, as opposed to stale. That is to say, Krieg know how to stay within a certain style without avoiding cliché. No easy task.

This split walks an interesting line. At once, it could be considered an appetizer for newbies as both bands demonstrate a compact serving of their styles across two relatively short sides. But on the other hand, heavy duty fans will find secrets and revelations hidden in the grooves and lyrics if they look hard enough. Both bands deal in the occult, so how amusing is it that revelation can be placed in plain sight? Maybe only the curious will see beyond the initial trappings, and maybe that’s the point.