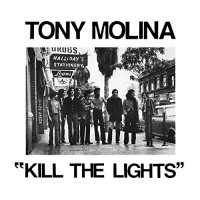 Tony Molina is one for brevity. His debut solo album clocked twelve songs in at less than eleven minutes. And while his new album Kill the Lights runs slightly longer (ten songs in fifteen minutes), his concise execution remains his most notable quality.

While short songs are not uncommon, Molina’s Elliott Smith singer/songwriter style is not usually where you find them. While only two songs (barely) exceed the two-minute mark, none feel rushed or forced to end. More impressive, Molina is able to cram multiple musical ideas into these songs. Now mostly supported by his acoustic guitar, he sings of lost loves in beautifully heartbreaking simplicity. “Now That She’s Gone” and “Look Inside Your Mind/Losin’ Touch” are standouts, the former with its stunning bridge/outro and the latter benefitting from a little breathing room. Rarely does he bring in a full band, but it’s effective, giving the melancholy an alternative outlet.

Kill the Lights is pretty, relatable and doesn’t have time to overstay its welcome.