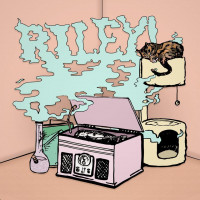 RILEY! are a band formerly known as Sine Cura -- one of the most fun bands doing the sad/emo/indie/pop/rock thing at present. If that descriptor doesn't land, think of bands like Dowsing and Pet Symmetry but with a way sadder hook. RILEY! marks a new era for them with the change in name, but for fans of old, it's great to hear them still churning out the signature sounds which make them so appealing.

Tracks like "Fight Milk!" have those winding, mathy guitars to them a la Tiny Moving Parts, but you can also sense how big an influence bands like American Football are. This comes to light especially on the sad acoustic jams like "Mansman". As for the Dowsing comparisons, songs like "American Pabstime" come to light -- bouncy indie-rock with some of the catchiest, melodic hooks in the game today. Basically, this album is Remo Drive, but written in the dark recesses of your bedroom after a breakup. RILEY! need a bit more differentiation though but you can tell that's something easily fixed moving forward. A few songs come off repetitive, but still, ain't nothing here that'll stop ya from taking a few more spins.

NOFX: Ribbed - Live In A Dive