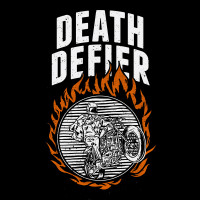 Normally I don’t review singles. But when DC’s American Television announced they would be releasing a two-song single/signature coffee blend as a single package, I immediately jumped on that (although I don’t drink coffee myself, I have a coterie of coffee aficionados I could turn to). Let’s start with the songs, shall we?

The lead track “Death Defier,” which lends it’s name to their coffee blend, is a catchy track that blends the best elements of Ramones-esque pop-punk with a slightly more melodic punk sound. I keep getting the feel that this is what Teenage Bottlerocket would sound like if they had formed, and were contemporaneous with, the mid-90’s punk resurgence. The song tackles the perils of gambling and, although ostensibly, the lyrics focus on gambling in particular; it could easily be expanded into a story about anyone who keeps taking risky chances despite the real possibility of bad outcomes.

I’m going to be honest here- I like the b-side track “The Creek” a bit more than the lead. It has a great early-90’s sound to it that speaks to my memories of driving through snow-covered roads into Schaumburg or Chicago to see a band play in a small club, all while listening to local acts, some big and some small, from the mid-west. I guess it helps that the song itself is about taking a step away from life’s stresses and spending a bit of time just relaxing and enjoying some tranquility (in this song, that place is literally “by The Creek”). It is fun, fast (but not overly so) and, once again, catchy. Surprisingly, the lyrics don’t always really rhyme but, somehow, vocalist/guitarist Steve Rovery seems to blend it all together successfully anyway. Kudos.

While the two songs of the single themselves are up for sale on their own, a purchase of the band’s signature coffee, roasted in conjunction with Weird Brothers Coffee in Virginia, nets you a download code for both tracks. I had my tasters grind and brew up a batch (I don't even know how to do that) and have a go at it. In their words, the coffee pleasant and approachable but, surprisingly, mild. They weren’t sure if it deserved the in-your-face “Death Defier” moniker although, they admit, that it may be better suited prepared as an espresso or something with a higher ratio of grounds to water (they brewed a batch that filled four cups). One thing they especially appreciated was the lack of any aftertaste, bitter or otherwise, which indicated that quality beans were used for the blend. Overall, they gave the coffee a 3.5 out of 5.

Because it is so hard to review singles (two songs are difficult to get a good opinion on), I vacillated on what score to give the music. Both songs are great but, then again, American Television’s style of music plays right into my wheelhouse. In the end, I’m giving it my top score for a single, which is 4/5. Since the average between the music and the coffee comes out at 3.75, and Punknews’ rating system doesn’t support that, I’m going to round up to 4 for the whole package.

Wisdom In Chains: Nothing In Nature Respects Weakness