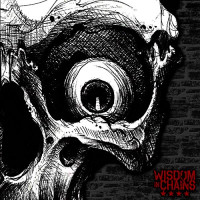 Nothing In Nature Respects Weakness (2018)

As much as the bromides about hardcore typecast it to certain clichés, somewhat deservedly, other times not, friendship in local and regional scenes is real. It’s an important key to the functionality of the scene. Committed individuals create touring networks, book venues, and provide local support with enough draw to allow regional bands to tour. For Eastern Pennsylvania, Wisdom In Chains have been one of those bands for the better part of the 2000s. With the release of Nothing In Nature Respects Weakness, the working class hardcore band continue on their grind.

Nothing In Nature Respects Weakness is the band’s 7th full length. With each new album, the band’s sound has taken vocalist Mad Joe Black’s knack for creating dogpile sing alongs with traditional hardcore punk and incorporated elements of metal and hard rock. Out the gate, the production on their latest album harkens back to the Epitaph sound found in the 90s, especially H2O and Pennywise. It gives the album a nice contrast to the clean, digital sheen found on many of today’s heavy releases.

The album has many valleys with enough diversity to not get lost in any one section. The first four songs on Nothing In Nature Respects Weakness are what the band does best. “Someday,” featuring Freddy Madball trading vocals on and off with Mad Joe Black, carries through with an anthemic chorus. “Better Than I Was” is a melodic and double time ode to overcoming mental health struggles. Overcoming is a common theme found here. They even tackle digital addiction in this frame with “Slow Drown.”

At the back end of the album, “Truce” and “Duck Down Stay Down” are two burners with guitar solos spanning heavy rock influence. For fans of nasty riffage in their breakdown, “The Boy and the Cave” closes out with something akin to a Killswitch Engage vibe. “Halfway There” and “Slow Drown,” featuring Davin Bernard of Eaten Alive and Angela Buckley respectively, make use of their 5-minute plus run times with diverse utilization of the guest spots.

Fans of punk rock and hardcore will have a hard time not finding at least a couple of songs to enjoy with Nothing In Nature Respects Weakness. Often seen touring hardcore festivals around the globe, Wisdom In Chains have released a solid demonstration of why their place in the hardcore scene is important, particularly in Eastern Pennsylvania.