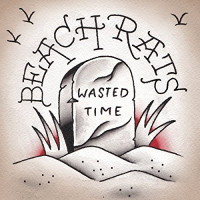 If you play in bands, there’s nothing more exciting than those first moments when you click musically with a group of individuals. In them, as you look around the room, the mutual eye contact with your bandmates confirms you hit on something everyone playing mutually digs. It’s a brilliantly fitful experience and often by chance of circumstance; a flyer, an internet post looking for musicians, a random interaction centered on music, or sometimes hanging around your neighborhood. That’s where Beach Rats, made up of Brian Baker, Ari Katz, Pete Steinkopf, Brian Kienlen, and Danny Windas, found themselves a few months back. They let people know with an Instagram post.

I don’t know exactly when or if the hypothetical moment described above happened, but I have a strong bet if it did, it was in the breakdown in Beach Rat’s first song “Lonely For The Night” off their debut album Wasted Time. The song starts with d-beat hardcore recalling early A.F.I. It continues on like that for a little over one minute leading to the instruments dropping for Katz to snarl, “lonely for the night!” Beach Rats finish in a perfected two-step breakdown sounding as if Social Distortion injected black coffee directly into their veins.

Wasted Time has the band throwing back to all shades of hardcore clearly rooted in the classics. “Sports Stink” opens and closes with a riff not unlike some of the more punk rock riffs coming out of Every Time I Die material. The body of the song has Katz laying out all the reasons he doesn’t give a fuck about sports culture.

This album is filled with breakdowns. Fun, big sounding, classic mosh parts. “Skins, Brains, and Dubs” has Baker spinning off into early post-hardcore territory. The poppier undersides of said song and “Stay All Night” draws connections to the Jade Tree catalogue. There are clear moments of influence from Minor Threat, Black Flag, and the Descendents.

Wisdom In Chains: Nothing In Nature Respects Weakness