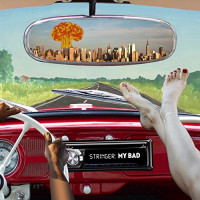 Anyone who’s spent time in New York City knows it’s fucking huge. With over 8 million people spread across five distinct boroughs, each with their own flavor and unique features, it can be overwhelming to someone more comfortable with smaller areas. It may take an individual well over an hour to cross into a different borough. New York City’s Stringer embody this with their debut LP My Bad.

Stinger have been bouncing around the New York City DIY scene in one incarnation or another since the early 2010s. After realizing their current lineup in 2015, the band has been refining their sound leading up to the release of My Bad. The album spans the spectrum of alternative rock. Clearly, bandmates Max Kagan, Mark Fletcher, Riley Zimmer, and Johnny Spencer are well versed having cut their teeth at the recently shuttered DIY venue Shea Stadium as its house band.

Occasionally, My Bad finds Stringer hitting a more mainstream sound. Lead single “Ghosts” and back end cut “Termites” brings in the brattiness of a Fidlar song mashed together with the straight-up rock of a band like The Hives. It might be easy to dismiss Stringer as a party band in the same vein if this is all you’ve heard, but a deeper look finds the band dealing with the changing nature of their neighborhoods and more introspective topics than booze and drugs.

That introspection also finds their way into the music. Tracks like “Rachel” and “Miss Slovenia” start with hushed guitars recalling Elliot Smith. The band excels at many sounds throughout My Bad. They are certainly pulling from 90s stalwarts like Third Eye Blind and Eve 6, but bring in more recent aspects of the indie scene as well. “Swimming” sounds like the aforementioned bands filtered through math rock inspired guitars. “Abergain” does a good job of incorporating all of these sounds and nicely highlights their use of keys which pop up throughout the album.

Stringer are pulling from all of the most recent eras of alternative rock. Whether they are bringing in aspects of indie or emo or pop-rock, all are done with clear talent. For a listener looking to explore the genre, My Bad delivers, even if it takes you a minute to get to the song that appeals to you.