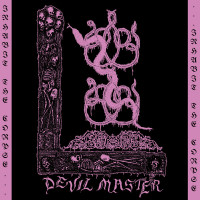 If you’re a student of classical studies, no doubt you’ve played the game where a person translates an English paragraph into Latin, Ancient Greek, or Middle Egyptian, and then a second person takes the translation and brings it back to English. Of course, the results are usually amusing, and if not that, then at least surprisingly Dada-ist in their new form. What’s even more interesting than that is that if you keep the game going, new things start to grow into the text even though no one is purposefully adding any new content… to a degree, it’s almost spooky how words and context can sprout from nothing,

Devil Master, a newish Philly band that keeps things dark and mysterious- no social media, barely announcing shows, their records go out of print before they’re even available- quite cleverly does this very trick with music. If you couldn’t tell by their playfully ambiguous name (Is it a mistranslation of “Devil’s Master?” Is Devil and adjective modifying master?) this band is heavily influenced by the early burning spirits and satanic Japanese punk bands. Zouo specifically is a reference point, though groups like G.I.S.M. and Guaze and the rest of that crew make their appearance known, as well.

As is the style, the band merges hardcore with death rock, while stapling in hair metal and thrash metals solos in between distorted growls of satanic prophesies. In fact, the vocals are so affected, that you can’t really make out any of the words whatsoever, and the resulting effect is that it sounds like the songs are being sung by some demon trapped in a dungeon five feet below your house. The titles tell you what they’re angling at: “Blood on my Shroud” or “Gates of Pain” for example.

Inhabit the Corpse, their second EP, finds the band ramping up their charge a little bit and the d-beat style hardcore is more pronounced than their first EP, which reveled more in a slower, creeping grime. Though, while this EP does smash forward, the band is sure to crack in some zipping 80s thrash solos that at time, seem out of place on top of the underlying rampage- purposefully so, that is. The band is interested in making somewhat of a jarring contrast, which at times gives the EP a somewhat disorientating, threatening sound. This is good, mind you. Many, many, many-a hardcore bands storm away at volume 11 and top speed, but somehow, that sounds safe. Devil master does not sound safe.

Most interesting for me is how the band morphs back their influences: Zouo, G.I.S.M. and their ilk. Upon reading lyrics by those bands, a Westerner might criticize the lyric sheet of those bands for being non-sensical or even utter cliché. (I myself did feel that way, and may still do, to a degree.) However, as a mega fan once explained to me, the point of the lyrics of a band like G.I.S.M. (“Endless Blockade for the Pussy Footer / You no way notice the demagogue”) isn’t always to be taken at its most literal value. Rather, there’s something to be said for ramming words together in unexpected ways to create new sensations or expressions. This is true.

So, that’s why it’s especially neat for Devil Master to take a form that was built from the (purposeful?) misplacement of English words and the purposeful juxtapositions of styles (anarcho punk and glam metal! Wow!) and bring it back to a Western expression. As with our classical studies game mentioned at the top, there’s more here than just the underlying source or influence thereof- something new seems to grow in the translation and recreation of the source material. In converting this kind of music back to a Western expression, it might be clearer as to why the vocals are so distorted and there’s no lyrical sheet provided. That is, the band seems to be trying to attach to a deeper conscious in order to generate a feeling, or even a vision, through sound, ambiance, and texture, that translates across any culture and not just one language.