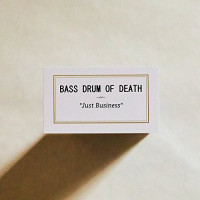 Bass Drum of Death return with Just Business their first offering for Sony subsidiary Century Media, routinely a home for major label hard rock and metal. The album is a resumption of activity after a self-imposed hiatus in 2015 and follows 2014’s Rip This and 2013’s eponymous album, which were both issued on Innovative Leisure. The lineup for this new album consists of frontman John Barrett joined by Josh Hunter on guitar with Len Clark returning on drums.

Just Business is the result of these charming “High School Roaches” undergoing major label sanitization to become a nearly faceless progeny of the 2000s arena rock birthed by Kings of Leon. The album flits between various progenitors of the hype machine ignited by the Strokes and their ilk. “Third Coast Dreaming” sounds like a slicked-up version of the Hives, while “Too High” recalls Arctic Monkeys’ AM phase as a paean to a significant other capable of sending Barrett into the atmosphere. Hell, Barrett even answers AM’s leadoff track with “I Don’t Wanna Know,” which unsurprisingly cops the swagger of the midnight Monkeys. Most egregiously, “Failing Up” verbatim rips off the White Stripes “Fell in Love with a Girl.” The song is a weak facsimile of the Stripes’ transcendent minimalism and Jack White’s unhinged vocal affectations. “I Love You (I Think}” cranks up the tempo on the Jesus and Mary Chain’s “Teenage Lust” from Honey’s Dead and furthers the eerie déjà vu that all of Bass Drum of Death’s songs on this new release too closely share DNA from classics past.

Despite the aping of what was considered in vogue for rock and roll in 2001, there are a few bright spots of originality on the album. “Heavy” is driven exclusively by a wedding organ processional and handclaps as Barrett’s paramour abandons her bridal march and seductively promises to “take him to the Lord.” Barrett’s lusty ecstasy leads him to proclaim in a charismatic falsetto: “Felt like I died / Like I died / Like I died” due to her heavy love. “Odds are Good” struts with a clean California vibe, despite the head scratcher of a chorus: “The odds are good / but the good ones are rather odd.” The title track has an infectious vocal skittering over the chorus that worms its way into the subconscious.

Overall, Just Business is an homage to neo-arena garage that serves as an adequate soundtrack to the waning days of summer. The album sounds maddeningly professional with the guitars, drums, and vocals mixed to perfection. Most of the songs will deceive you into thinking you’re listening to somebody else or that you’ve heard these tunes before. Lyrically, it has no ambition beyond the celebration of being a rock and roller and reliving the glory days of Meet Me in the Bathroom. However, within “Heavy” lies the promise that Barrett is capable of staking his own identity to this well-worn rock genre.