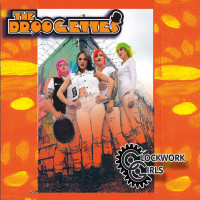 Directly playing to one’s influence can be a dangerous move. Certainly, punk rock has a rich history that not only should be saluted and remembered, but also is used as the bulkheads to define punk in the modern context. That being said of course, there are countless d-beat bands that do their darnedest to sound just like Discharge and there are countless street punk bands that try their very best to sound exactly like GBH. But, why would I want to listen to say, Disformity (a band I just made up), when I could just listen to Discharge?

The Droogettes, who make no bones about their history, seem keenly aware of this on their debut LP, Clockwork Girls and deftly steer through influences without being sunk by any of them. No doubt, there is a heft dose of Oi! And classic first wave punk on this record. “No Apologies” pulls from the playbook of the Oppressed and likewise, “Little Boy Bombs” is built from three-chord banging with sing along choruses. Yet wisely, the band doesn’t stop there.

One of the record’s more interesting aspects is the interplay between main vocalist Jenn S and guitarist Elija. Frankly, Jenn is a fantastic singer. With a soaring, powerful voice, Jenn often comes off as forceful, and sometimes even aggressive, all while maintaining a natural disposition. That is, this isn’t Jenn trying to sing like, say, Colin McFaull, she’s trying to sing like Jenn. Take “Fun with Guns,” for example, which finds Jenn spitting a rat-a-tat string before snapping to the classic Oi-style “OOOOOooooo” which instead of feeling like it’s an homage to hallmark, sounds like exactly the thing Jenn being Jenn would do at that point in the song.

And speaking of that song, as Jenn comes in with her high and cutting vocals, Elija counters with a more brash attack. Elija revels more in the savage and chaotic delivery, giving the band a menacing edge, which frankly, when bounced off Jenn’s contributions, makes for a really, really effective double attack.

The word on the street is that Rachel wrote most of the material here, and to her credit, she’s able to walk an model line between reverent and heretical. Re-cut of “We don’t love you” is Oi in it’s idealized form, which like it’s sister tracks, forms the backbone and tone of the release. But, it’s when the group veers outside of that context the record moves form “good” to “great.” “Keep on drinking,” is basically a hardcore cut, and like similarly themed Black Flag songs before it, its funny and totally rocks. “Tiki Bar” is as glam as it is anything else, and has a call-and-response chorus (featuring Noel Martin of Menace!) that could be ripped from a Rodgers & Hammersmith production. That's also not to mention Rachel's driving bass lines that propel the whole thing along with a forceful, but flighty clip.

But what really elevates the release is how the personality of the members breaks through in a genre that often attempts to wash out personalities. Certainly, the core expression here is “we’re the Droogettes and we don’t take shit” which, if pitched from four macho hardcore dudes, would be route. Yet, when pitched from the Droogettes, it actually makes the release multi-faceted, in part, because despite their hard exterior, vulnerabilities are expressed throughout the album- even if they don’t know it. Look at “Bitter Old Man” and “Bovver Girl.” Both of those tracks find the band on the attack. Yet, if you really dig into it, they’re not on the attack because they’re “tough.” They’re on the attack because the subject, or someone the subject represents, has either tried to minimize, or bully, or demean them in some way. That’s not the entirety of this release, mind you, but it is there and it’s one of the things that separates this band from the pack. For all their reference to hallmark s of a few genres, and for all of their bristling, the Droogettes are strong and courageous enough to be human on this release and on that fact alone, it rises above. It also helps that sometimes they are really, really, really funny. The disaffected “yeah… yeah…” refrain-response to a drunken patron on “Tiki Bar” cracks me up every time.

In their earliest stage, the Droogettes played up the Kubrick angle with all white get ups and bowler hats- they’ve downplayed that since then. Likewise, their earliest releases veered between being pure oi and pure glam. As they navigated their release, they picked up the highpoints of those genre and others, and moved forward as an amalgamation. Yet, while the band still does reference all of those things, what gilds Clockwork Girls is the fact that the personalities of band members themselves- Rachel, Jenn, Elija, Ginger- come through on the tracks. Most bands stumble at this most critical step. That is to say, this isn’t a oi record or a street punk record or a glam record or even a punk record- it’s a Droogettes records and the rest of all that happens to fit into their self-expression.