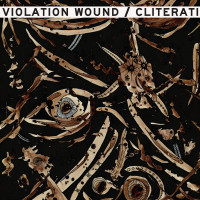 Cliterati is one of the more exciting newer (not necessarily younger) bands on the hardcore scene. Their 2016 demo/self titled EP is a personal favorite. (I’ve got the hot pink 7” version.) It was raw, angry and political, but not so serious as to feel unnecessarily oppressive. They followed that up with the very solid digital Nuked at Birth EP earlier this year. (It contained the title track and covers by L7 and Cro-Mags.) Now comes a new split LP with Violation Wound, who I was not previously aware of.

Cliterati’s side of the split largely picks up where Cliterati left off. After the first spin, I was a bit concerned that the band was just rehashing their debut. Repeated listens proved that this takes some subtle steps forward. The most noticeable thing is the improved production. While it’s not overly polished, it has a more dynamic sound. There are also subtle flourishes that help to distinguish the individual tracks. All the songs are fast and shouted, but they each have their own distinct feel. Let’s face it, the worst thing a hardcore band can do is change too much, too fast. Here, Cliterati progresses just enough to stay interesting.

Opener “Water is Life” uses history to teach a lesson that apparently still needs learning. “Nuked at Birth” is included here too, and is a hostile feminist anthem. “War on the Poor” could be a rallying cry for the 99%. “Alt-Wrong” is the best song I’ve heard on the topic of the alt-right so far. (Way better than the Bad Religion one.) All the songs feature raging guitars, driving beats and Ami Lawless’ singular voice. Cliterati contribute five excellent songs and 12 minutes.

The two sides of the record vary greatly in length. The five Violation Wound songs clock in at only five minutes. Opener “Victimizer” is super catchy, but it’s over in a mere 1:12. It’s the second longest of their songs! There was something very familiar about Violation Wound, but I couldn’t quite put my finger on it. Once I figured it out, it’s all I can hear. They sound like modern Napalm Death. Not that that’s a bad thing. Closer “The Church of Go Fuck Yourself” is probably a little more light hearted than the typical ND track. The little taste of Violation Wound I got makes me interested to hear more.

Cliterati is based in the Pacific northwest, and haven’t really played outside of the West Coast. (I hope they one day make it to middle America.) I’ve noticed following them on social media that they play a fair number of shows with extreme metal bands. Musically, they’re aggressive enough to run with that crowd. This split makes more sense in that context. It may be as much about geography as it is about musical similarity. No matter how heavy Cliterati gets, they still feel like a punk band. Either way, this works. Another winner from the good people at Tankcrimes.