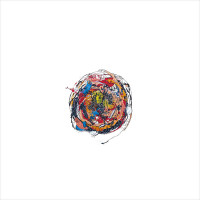 mewithoutYou are a band that has earned every right to do whatever they want with every record. Alt, folk, radio-friendly, indie... whatever it is, bet your bottom dollar they'll be great at it. Which is why, as much as I love records like Ten Stories and Pale Horses (yes, I like their later works more), I honestly wouldn't compare this new EP to them. I'd rather focus on how special untitled is, a surprise release that whets the appetite for October's full-length, offering a snapshot of why no matter what, this band just can't seem to lose momentum.

Scattered across the record are lush post-rock melodies, giving untitled space to breath. It goes from minimal soundscapes to rushing swells, which I can only describe as beautiful. Catchy's always been a forte of the band but something they've never really hung their hats on which is what makes songs like "Bethlehem WV" and "Cities on the Plain" pop. It's not just about Aaron Weiss' soothing vocals, his poetry in motion or how cinematic the tracks are -- think of Mogwai meets Gates etc. -- it's like you're listening to a band which knows when to create mainstream music and how to keep it still feeling indie. These songs go from crawling, slow burns and lulls to big climaxes without ever getting too loud, and in so doing, it's like they're telling you to wait until October to really get the big picture.

Even the acoustic take on "Winter Solstice" and the folk-y "Kristy w/ the Sparkling Teeth" are as comforting as ever, reminding you of their past endeavors and that no matter what, if you're a loyalist, you'll still get songs of old to soak in. And that's what mwY do so well -- whether it's venturing into new territory or paying tribute to styles of the past, they take the sounds at hand and own it with their distinctive spin. In short, every signature they leave is pure art, and this is no different. October, hurry the fuck up please.