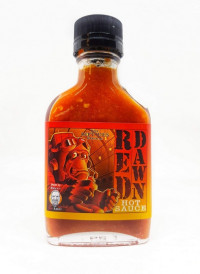 I’m a pretty big fan of hot sauce. Even as I speak I have Frank’s Red Hot, Louisiana, Crystal, Tapatio and good old fashioned Tabasco in my refrigerator. I keep extra packets of Taco Bell Diablo sauce at work in case my lunch is too bland. I always try to order something hot from the menu when I go out to eat. I buy jalapenos in those huge jars from Sam’s Club. I prefer everything I eat to be at least a little spicy, but I’m not afraid to stare down the scorchingly hot stuff either. I’ve got an iron lined stomach and rarely face any negative ramifications. (Although that seems to be less true as I get older.) Why the hell am I telling you all this? To establish my credibility as a judge of hot sauce!

I recently acquired two different types of hot sauce made for Canadian pop punk heroes The Riptides. I’ve been a big fan of the band and I already told you how much I love to burn my insides, so this was something that I was very interested in. My understanding is that the band worked directly with Haico’s Hot Sauce to get exactly what they were looking for. In other words, they didn’t just slap their name on some shitty product in hopes of making a quick buck. The attention to detail shows.

The first one I tried was called Red Dawn. It was inspired by a song from The Riptides’ 2006 LP Hang Out. (Which I assume was at least slightly inspired by the 1984 movie of the same name.) It’s a Cayenne and Ring of Fire pepper based sauce with mild to medium heat. Its other simple ingredients include Vidalia onion, apple cider vinegar, tomato paste, Maple syrup and soy sauce. Despite the fact that I’ve reviewed over 300 records and live shows, I wasn’t really sure how to proceed. I decided the best approach was just to eat it.

I started by putting it on a plain tortilla chip. I found it to be slightly sweet and very tasty. I didn’t really notice the heat at first, but after a few bites I could feel the burn. Next I tried it on vegetarian (sauteed onions and green peppers, shredded cheese, avocado, cilantro and lettuce) tacos. (I’m not a vegetarian, but I was using leftovers for a quick lunch.) It brought out the flavor of the veggies and added a nice kick. It was so good that I didn’t even miss the meat. Red Dawn also paired well with a warm, soft, unsalted pretzel.

Chicken tacos were next on the menu. (No, I didn’t eat all this on the same day!) Once again it added an amazing flavor to every bite. The beauty of Red Dawn is that it brings out the flavor of the food rather than bury it. (This is an issue with the hottest sauces.) This was the day I had the most sauce, and I didn’t have too many negative consequences the next day. (Less than a night out drinking PBR.) Chicken burgers (ground chicken and caramelized onions) also benefited from the sauce. Next I used it with some boneless, breaded, lightly seasoned wings. It was delicious and I sopped up every drop of the sauce.

For you red meat eaters, I tried it on a traditional hamburger (beef patty, cheddar cheese, romaine lettuce on a sesame seed bun). Not surprisingly, it was excellent. Last but not least, I had Red Dawn with pork chops. Once again it was outstanding. I believe it would be good on anything that requires a little extra heat. Just a dash will add a touch of flavor, a heavier hand will add some burn.

I had some family members try Red Dawn to confirm my high opinion. My spice loving son gave it a big thumbs up, and even the relatively heat averse Mrs. Trauma enjoyed it in small quantities. (She also appreciated the pure ingredients.) I must mention that the label art by tattoo artist Glen Paradis is also a nice touch too. I was a big fan of The Riptides’ 2017 album Canadian Graffiti. I might be an even bigger fan of their hot sauce. You know what they say - the key to a man’s heart is his stomach, not his ears. They’ve won my gluttonous heart with Red Dawn.