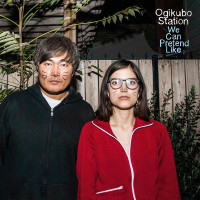 Don't ya just love it when two of your favorite musical acts come together to make an even more awesome band? I mean, I'd stop short of calling Ogikubo Station a super-group but really ... what defines 'super'? It's not quantity, it's the quality, right? So by that definition, yeah, this duo (Mike Park and Mixtapes' Maura Weaver) is a super-group just based on the fact that We Can Pretend Like is that friggin' good.

What's I love most is the record is absolutely nothing I expected, and I say that as someone who deliberately ducked any preview tracks just so I could be pleasantly surprised. And boy was I! Sure, it has some quick-paced pop-punk elements in the mix... but mostly, it's a dialed back melodic indie record that I can see taking college radio (or Netflix rom coms) by storm. Think the indie-punk burn of The Flatliners, with some Jets to Brazil thrown in.


That's what you instantly get off the opening track "I've Been Thinking of St. Louis" and the other poppier mid-tempo jams (see "Sounds of Yesteryear") which feel like Mike just wants the world to slow down and chill a bit. With synth beats dropped into the punk riffs, it's a whole different sonic dimension (at least from the music I've heard from them) and a direction I really didn't think they'd go. I love how Maura leads most of the vocals with Mike subtly there backing her up, although he does take lead on quite a few warm acoustics like "Let the World Know" or "The Prettiest One". In short, they really play to each other's strengths and whatever the result is is emotive and catchy.

Their energy and dynamic is so astounding (e.g. the shimmery rom-com feel of "Drowning at the Watering Hold") that it's hard not to call the album infectious. I know it's cliched, but it is what it is. This is a summer record wrapped up in a break-up record wrapped up in an album begging you to unite and make the world a better place. And yeah, it'll definitely be a record I'll be playing to close out this year because something so powerful and inspirational (which sounds so damn rock n' roll good!!!) deserves all the replay value in the world.

Only On Weekends: Another Wasted Night