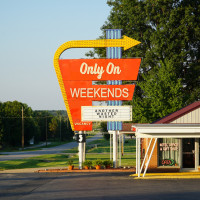 It seems in 2018, when a band considers themselves “pop-punk”, it doesn’t have the same ring to it as it did in the 90’s. Today’s pop punk bands, while catchy for sure, usually have some elements of breakdowns, gang vocals, and other influences from all over the map. In the 90’s, pop punk meant most of the Lookout! Records roster (Mr T Experience, Green Day, Screeching Weasel), Bracket on Fat Wreck, The Queers. When I think of true pop punk, those are the bands that come to my attention. When I got the press release for Only On Weekends’ new full length, “Another Wasted Night”, I was curious. They claimed they were a pop punk band, and they tapped Jesse Cannon (Menzingers, Saves The Day, Transit) to produce the 12 song album.

Well is it pop punk? Absolutely, but certainly with a present influence. The band certainly pays homage to the past, with the song “Voices” sounding like it could have come from a Lookout! Compilation, while bass driven “Not the Only One” has backing vocals in all the right places, almost sounding like Fenix TX. At 12 songs, and each song going 3 minutes plus, it could drag for a listener, but there is enough to keep fans of the genre engaged for sure.

Closing the album is “Thirty-Two”, an introspective song about the fears of growing up and dying alone, which as time goes on some of us can all relate to. It was a great song to end the album with, and I can see it connecting with whoever listens to it, and I can see the crowd singing the ending with the band in a live setting. If you like your pop-punk well versed in the 90’s blue print of doing it, this is for you.

Mount Eerie: A Crow Looked at Me