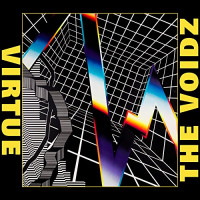 For many people my age, I’m thirty-two, The Strokes were a breath of fresh air when they put out their debut, Is This It, in 2001. We were awash in sea of nu-metal and rap/rock, and The Strokes, The White Stripes, and similar sounding bands were a back to basics garage rock sound that we could tolerate on mainstream rock radio. Julian Casablancas released some less than stellar solo material in the mid 2000’s and put his band, The Voidz, a few years later. Their self-titled debut came out in 2014, and was semi well received by rock critics.

This year their follow up, Virtue, was released and the write ups got me fairly excited to hear it. Promises on no-wave, garage rock, and New York disco influences across the record. I feel like I need to explain that last one, the New York disco. While I’ve never been a fan of the genre, the musicians on the records were always solid players and the influence it had, via sampling, on early hip-hop is unquestionable. All that being said, the record as a whole always sounded like something really cool was about to happen and then someone said that won’t play with the audience.

“Leave it in my Dreams” is a great song and it would have been at home on any album The Strokes made. The being said, it sounds so much like it belongs on one of their albums … it makes no sense here. The melodies are very similar to those found on The Strokes aforementioned debut, and at the end of the day the song just ends up sounding like a rejected B-side or a demo that could be easily marketed as a single to draw in fans still waiting on another album by Casablancas’s previous band.

There are bright spots on the album though, and they tend to occur when the band steps away from worrying about who the album might appeal to or if the song will get radio play. The blend of New Wave, NYC disco, and just a touch of No Wave actually shows up on “QYURRYUS.” In addition to that, the band uses auto-tune in a tasteful manner. The song really sounds like something that could have come out of the CBGB’s scene in the late 1970’s or early 1980’s. But the production is too clean and the band is just to clean in their execution of all these elements. Don’t get me wrong, I have no issue with bands who can play their instruments well … these just sounds over rehearsed and lacking in all the spontaneity that made the CBGB’s scene produce so many ground breaking bands.

Even within songs that don’t fully work, such as “Pyramid of Bones” the band pulls certain things off. Amidst a guitar that sounds like it could be from any number of 80’s hair metal songs over other elements that would be at home on a new wave album … there is drumming that is straight off a metal album. Now, the metal guitar doesn’t work. It sounds as cheesy now as it did then, and without the novelty of a band like Steel Panther doing it. Well, it’s just cringe worthy. But, I’ll be damned if the drums don’t somehow hold your attention.

Somehow, on “Permanent High School” the band comes off sounding like The Gorillaz without any of the adventure or conviction. They then lace this with a vocal melody that is near identical to what was on The Strokes song, “Is This It”. Which isn’t wholly a bad thing, but it makes the band sound like they were trying to capture an audience rather than a sound that would find an audience. There are some bands that this works for, but here it just sounds like they were taking notes from marketing and A&R rather than making the music they wanted to make.

Another bright spot pops up on “ALieNNatioN” which opens with a really interesting electronic reggae/dub feel and had me thinking they waited until the end of the album, but maybe this goes somewhere. Unfortunately, the song did go somewhere and it was away from the interesting sound back into a highly formulaic attempt to again capture an audience.

This isn’t a bad album, don’t get me wrong. The songs are good songs. The musicianship is on point. But, the band never gives me a reason to care about them. The Stokes played songs that were lazy and gave the impression that they didn’t care. And dammit, it worked for them across an entire album and here and there afterwards. The Voidz seem like a band trying very hard and wanting desperately to appear like they don’t care. And that’s the album they got, an album that sounds like something exciting might happen if they just let it. Everything about this album had it filled with the potential to be good, or even great. Instead, we got an album where the people playing on it were too concerned about where that potential might go, rather than just letting it get there.