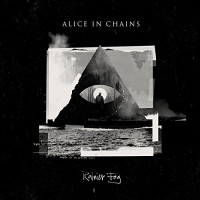 Mount Rainier is the largest mountain in the Pacific Northwest and is an active volcano, posing a perpetual threat to the Seattle Metropolitan area should it come alive and send rains of ash and fiery debris on the populace to the north. Originally named Tacoma by the native population of the area, George Vancouver (a Royal Navy officer and explorer of the Pacific Northwest) renamed it Mount Rainier in honor of his friend Rear Admiral Peter Rainier who served in the United Kingdom’s Royal Navy during the Seven Years’ War, the American Revolutionary War, and the Napoleonic Wars. A historical monolith threatening to explode seems an apt descriptor of Alice In Chains’s latest offering.

Lunging with stabs of serrated guitar, the band is back on the attack with “The One You Know,” lead track on new album Rainier Fog. And then there were two, “an imposter so disowned” according to Jerry Cantrell as “black waters flow / [from] wells [running] dry” as Alice in Chains and Pearl Jam are the only survivors left of the Big Four Monsters of Grunge (RIP Nirvana and Soundgarden). William Duvall’s vocals are both familiar and distinctive enough to continue Alice In Chains’s mission, and he is able squeeze in enough of his own identity to keep things invigorated as we travel further from Layne Staley’s spectre (who will forever haunt those dual vocal melodies with Cantrell). “The One You Know” toys with Cantrell’s existence within the greater identity of Alice In Chains as he wonders if “it matters / If I’m still here or I’m gone,” while also defiantly insisting “I’m not the one you know.” How ever far Cantrell feels he’s moved from his younger self at AIC’s peak, these songs are a welcome reminder that he is an ace at mining the guitar for downtuned riffs and turning in some solid songwriting.

This collection is not entirely self-doubting introspection. AIC turn some vague heat toward the current national political climate with “Red Giant” as an easily guessed antagonist “on stage up here / toying with your own fears” plays us for the fool with the belief that a “lie ain’t a lie if you’re winning them over.” Over a stumbling, lumbering riff, “Drone” finds another antagonist “in and out of madness” spending an inordinate amount of time “feed[ing a] pet black hole.”

For Rainier Fog, the band continues its working relationship with Nick Raskulinecz (Foo Fighters, Mastodon) who once again turns in a well-produced slick assemblage of insolent, anachronistic grunge and hard rock, while making space for enough deviation to give these songs vitality. “Fly”’s crystalline acoustics are only intermittently interrupted with peeling guitar squeal. “Maybe” begins with a haunting acapella dual vocal and also features an excellently mixed blend of acoustic and electric guitar interplay. However, despite these mild sonic detours, the album is bookended by reliable grunge exercises with the aforementioned “The One You Know” sitting opposite “So Far Under” and “Never Fade.” These numbers will fit comfortably into AIC setlists hopefully for years to come.

Rainier Fog never reaches the heights of “Man in the Box” or Dirt, but it shows the band has plenty of life left to live.