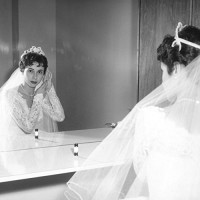 Breakups and the aftermath often partner with soundtracks. Sometimes this is intentional, sometimes it’s through weird association, but it’s certainly powerful. Like a Pavlov’s dog for heartbreak. It’s embedded in many different ways. A remote lyric may line up so succinctly with your own feelings it attaches to the fabric of the breakup. Other times it’s a song in the background syncing up with a devastating moment. Sarah Tudzin’s band illuminati hotties captures all of a breakup’s agency in that same matter with Kiss Your Frenemies.

illuminati hotties debut Kiss Your Frenemies is the type of indie centered pop music that dominates the record catalogues of Polyvinyl or Merge, but finds its home on Tiny Engines, a label more known for emo leanings. Self-described as “tenderpunk,” the range they explore within indie and pop music is expansive. This attention to sonic detail allows each song’s production to evolve maximizing the style the band finds itself in, from pop-punk to shimmery electronics to emo shuttered acoustics. This ability to navigate sound can be attributed to Tudzin’s long resume in the studio producing prominent artists, both indie and mainstream.

Building on the production’s ability to pull out feeling in the instrumentation, illuminati hotties pair each song with cutting lyrics documenting all the nuance and mania in a breakup. The album opens with Tudzin, in a quieted singing voice, admitting “I wanted anything you wanted” over 50s-style chords emptying into the indie rock charge of “(You’re Better) Than Ever." "Pressed 2 Death" states "you held the fabric of my heart and ripped it" wondering what's up with cold brew and PDAs.

Kiss Your Frenemies captures moments of misguided hope and the loss of a feeling candidly. This can be direct like in “Shape Of My Hands” where the protagonist explores the tug and pull immediately after a breakup when confusion surrounding status lingers. It can also be revealed in scenes, like in “Paying Off Happiness,” wondering how you ended up on a couch on the east side after a round of drinking. The lyrics are well-written and poignant.

Kiss Your Frenemies is a very good debut underscored by production attentive enough to match its lyrical content. Fans of Jessica Lae Mayfield, HelloGoodbye, or Diet Cig would enjoy the similar territory. If this is the soundtrack to your breakup, you’ll be better off without them.