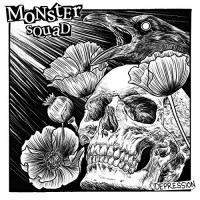 After more than a decade without any new music, Monster Squad is back with Depression. I’m pretty sure I’m not going out on a limb when I say that this is their most challenging record to date. I recently discussed the best kind of summer records. You know, warm, breezy and generally upbeat. The kind of thing you listen to while drinking outside with friends. Depression is definitely not that. It’s the type of record you listen to alone, in the dark, in the dead of winter.

Depression is an unflinching look at addiction and mental illness. The included lyrics are raw and honest. The record also contains a separate insert where singer Phil Geck tells the story of nearly dying of an overdose at age 22. The phone number for Suicide Prevention Lifeline (1-800-273-8255) is included, as is information about Narcan (harmreduction.org). In other words, Depression is a record with a purpose. It delivers its powerful message without coming off as preachy or sacrificing an ounce of intensity.

Monster Squad recorded live to tape, and it has a wonderful, primitive punk sound. (I especially love the underproduced drum sound. Too many bands tune and produce the drums to death.) Depression was tracked, mixed and mastered by Jack Shirley, who previously worked with Deafheaven, Hard Girls and Jeff Rosenstock among others. His minimal production is a perfect fit for this band. The guitars are loud, the vocals are strained and the mix is very in your face.

Opener “Fall and Burn” has sort of shambling beginnings before really kicking into gear. It’s one of a handful of songs that deal with depression, addiction and personal failure. “Breaking Point”, “Desolation”, “Never Learn” and “Withheld Forgiveness” follow suit. The lyrics from “Thieves of a New Age” might best sum up this sentiment. “The end of hope/The end of a fucking rope.” As abrasive as the songs can be, you’ll still want to sing along with most of them.

The artwork also deserves mentioning. The front cover is in a stark black and white tattoo style by Phil Geck, and really sets the mood. The back cover was done by none other than legendary punk artist Winston Smith, who is best known for his work with Dead Kennedys. It’s a nice package that’s worthy of the ambitious music inside. Monster Squad has delivered a heavy piece of work with Depression. It takes more effort to get into than other records, but that just makes it that much more rewarding.