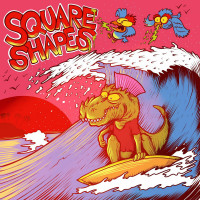 It’s presumably pretty difficult to be a punk rock band in Hawaii, but that doesn’t really seem to phase Square Shapes, who hail from Kauai, an island steeped in Hawaiian culture and tradition. The band’s debut self-titled album is a melodic hardcore force that screams of speed  and aggression. It strays far from Hawaii’s laid back charm, despite the cover art.

For the most part, the album is a tale of two speeds. Many of the songs clock in at under 2 minutes, mainly because they’re uptempo hardcore songs in the same vein as Dead Kennedys, Minor Threat, or Black Flag. Songs like “Knife Fight”, “In The Lineup”, and “Pick Your Fight”, among others, contain speedy guitar progressions, pounding drums, and shouting vocals, perfect for circle pits. Other songs, like “In The City”, “Caramia”, and “Even Though”, show that the band has the ability to tone down the tempo, without sacrificing any grit or aggression. And sometimes, the band successfully blends high octane speed with loads of melody in songs like “Sucker” and “Starry Night”.

The musicianship and songwriting is clearly tight on this album, but the most unique aspect of this LP is the vocals. Santiago Soto has the capability of shouting, without screaming. And most of the time, he sings with a vibrato at the tail end of each line, similar to Jello Biafra but better.  It took me a couple listens to get used to this vocal technique, simply because I wasn’t expecting it. But in the end, it compliments Adam Phelps’s guitar, Toby Brown’s bass, and Luther Burney’s drums really well.

This is a cd that I have been playing non-stop since I bought it. Super catchy, lots of aggression, and great songwriting. And with a tour of the mainland coming up, the band shows no sign of slowing down.