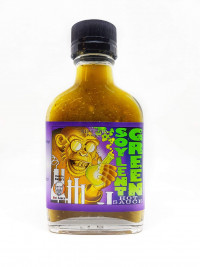 Long running Canadian pop punk favorites The Riptides are celebrating 20 years as a band by once again expanding their product line. (The day will no doubt come when the band is as ubiquitous with Canada as Tim Hortons.) Anybody can sell T-shirts, records, CDs and patches, but these days resourceful bands are thinking outside of the box. Last year The Riptides introduced the world, or Canada at least, to their own beer. Area 613 is a Belgian Ale made by Big Rig Brewery that I unfortunately have not had the chance to try. Not yet at least. Fortunately, I was able to experience their new hot sauce.

Soylent Green is a jalapeno and citrus based medium to mild hot sauce made by Ottawa’s legendary Haico’s Hot Sauce. Its name was inspired by the 1973 cult classic movie and its simple ingredients include Jalapeno Peppers, Vidalia Onions, Apple Cider Vinegar, Lime Juice and fresh herbs and spices. I was definitely drawn to its green color and cool artwork by tattoo artist and Barnstormer Studio owner Glen Paradis. There was clearly great attention paid to every small detail.

I first tried Soylent Green on a simple corn tortilla chip. It was tangy and not as sweet as I expected. I had never tasted anything quite like it. The heat showed up after a couple of bites. It was delicious, but there was an undeniable dill flavor. I next tried it on veggie tacos. It did a good job of adding kick and bringing out the flavor in the onions and peppers. Soylent Green was also good with a warm, soft pretzel, but once again the dill flavor was very prominent. Next up was chicken tacos. (I like tacos. Sue me.) The sauce was a nice enhancement. A little for a flavor boost, or lots for a more significant kick. This was the day I had the most hot sauce, and I had no negative gastronomical consequences. In other words, I didn’t have flames shooting out of my ass the next day.

Soylent Green brought a unique and distinct flavor to plain wings. My tongue burned a bit as I soaked it all up. It paired best with chicken burgers. (Ground chicken patty and carmelized onions.) It brought out the natural flavor, rather than bury it in heat. When you use something like Frank’s Red Hot, all you really taste is the Frank’s. That’s not the case with Soylent Green. It’s fairly refreshing. It was also very good on a traditional cheeseburger. It proved best on things that you would normally put pickles on.

Soylent Green is a good quality sauce. It definitely deserves high marks for originality. It’s not likely that it would become my go to sauce, but it’s nice as an occasional novelty. It’s worth keeping around just for Summer. It’s great on grilled hamburgers, and I’m sure it would be great on grilled hot dogs too. Soylent Green isn’t made from people, but if you slathered it on human flesh, I’m positive that it would be damn delicious.